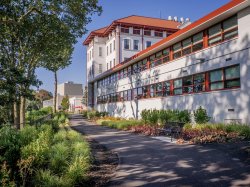 Camilo Manjarres is a 2014 graduate of Montclair State University. A presentation by TWC representative in Fall 2012 changed his entire college (and, ultimately, professional) career. Uncertain about his future, spending the Fall 2013 semester with The Washington Center established his career path while delivering a wealth of experiences and a group of friends Camilo considers family.

If you are interested in learning more about The Washington Center, click here and stop by Student Center, Room 441 at 3:30pm on Monday September 23.

What prompted you to seek out an internship as part of your college experience? Why do that internship with The Washington Center?

It was the opposite order. I learned about The Washington Center (TWC) first, when someone came to my Comparative Politics class in the fall of 2012 to tell us about it. At the time, I had no clue what I wanted to do for a career. My professor was very into the importance of the practicum and the theory. The girl who did the presentation had just been at TWC that summer and she talked about what a great time she had putting those two together, practicum and theory, but also this idea that there’s so much more to political science than just the U.S. government and history. I was mesmerized by the presentation. I thought, wow, I can go to Washington, D.C., the place where it all happens and really do something that affects people’s lives. What that something was, I wasn’t entirely sure. I applied to The Washington Center almost immediately after I saw her presentation.

What was the most impactful experience during your time as an intern in Washington, D.C.?

Going to TWC was my “abroad” experience. I wouldn’t say I had one impactful experience, but rather it was the entire semester that changed my life. I was a commuter student, working my way through college to pay for it. I was on campus strictly for my classes and the occasional time crunch before an exam or paper. I didn’t really get that whole on-campus experience — the exchange of ideas, meeting and mingling with people from different backgrounds — until TWC. It opened up a whole new cultural experience. What I gained the most was a different way of thinking from listening to other peoples’ experiences, mindsets and thought processes as to why they were pursuing a specific career. I welcomed all of it.

What was it like for you, as a commuter student yourself, to live independently for the first time while also exploring a new city and taking your first career step?

That was one of the many enticing aspects of the entire program. The prospect of moving out, living on my own, having to cook for myself and wash my own dishes, not that I wasn’t doing that at home, but it would become a small snapshot of life as a young professional. Learning to be successful on your own was what I desired. It allowed me to start adapting to what my future would look like, or at least what I wanted my future to look like.

It was definitely intimidating, don’t get me wrong. There were times when I was homesick. But at the same time, I was excited for it. It was a step out of my comfort zone and a step that I wanted for myself. I had that spring and summer to prep for it, including preparing my mother who was freaking out about me moving four hours away to a whole new city. I also had to prepare financially because I was paying my way through college. Part of that entailed speaking with my boss about a 16-week hiatus I wanted to take and make sure I had a job when I got back.

What was it like to intern at your organization? How did the skills and experiences from your TWC internship affect your professional development or career path?

My internship was at a small lobbying shop called The Chwat Group and consisted of doing a little bit of everything. We could work on immediate projects we’d need to prepare quickly or more long-term projects where we put together a lot of research. One of the larger projects we did involved conducting research for a presentation that I and my fellow interns had the opportunity to go to the Hill and discuss with legislative assistants from the House and Senate. Our boss also wrote a small piece of legislation that made it into a bill that was voted on in the House. After my internship, I could say I lobbied on Capitol Hill and contributed in some small way to something that led to legislation on the floor. Never in my life would I have gotten to do those things if not for my opportunity through TWC. Looking back now as a young professional and having worked on Capitol Hill years later, I had a full professional experience as an intern.

If you had asked me five years ago if I thought that I’d be doing what I am doing today, I would have said you’re full of it. I didn’t think I could hack it. I had no idea I could do some of the things I’ve done. I’ve worked in Congress, worked for the now-governor of New Mexico, then-chair of the National Hispanic Caucus and contributed to her race. Never in my life did I think when I was at Montclair that I’d have the opportunity to do some of the things I’ve been able to do so far. When I look back, I’m like wow, that’s awesome. I wish I had devoted myself to promoting my personal and professional growth sooner.

You came to TWC with a group of friends from Montclair. What were the advantages of having that group? How have you managed to remain in touch?

I keep returning to it, but it all started in the Comparative Politics class. All five of us listened to that same presentation about TWC. The following spring, we didn’t really know each other but we knew we were applying together and started our still ongoing relationship. We started filling out our applications together, we started talking about our different interests and what we were hoping to get out of it. We became really good friends that fall of 2013. The five of us explored the city together, checking out all that D.C. had to offer. Dennis and I were randomly assigned to the same apartment and ended up at the same internship site with The Chwat Group. That’s when we got really close. We really had no choice as we were sharing a bedroom and a bathroom. Being with them enhanced the experience. It wasn’t just my experience I was enjoying, but also living vicariously through what they were experiencing at their respective sites. I feel like I gained a wider network through them than I would have on my own.

Out of the five of us, four are back living and working in D.C. And to this day, we’re all doing pretty well. Brody’s a successful lobbyist. Travis works for intelligence, but I won’t tell you what he does. Dennis works for a nonprofit doing development work. Mayar is the one remaining in New Jersey. He went on to law school and recently graduated. He’s working for a judge in New York. We see each other often, including when we went to our TWC roommate’s wedding last fall. It definitely made things much easier not being completely alone in the city.

I would recommend the TWC opportunity because it can change your life. It changed mine. It was definitely the catalyst to everything in my life today. I like to think that I’m doing relatively well for myself and I don’t think I would be where I am today if it wasn’t for TWC. It was a giant step out of my comfort zone. I had to make a lot of arrangements in my life to make it happen, especially as a commuter student. I didn’t know what I wanted to do with my life. TWC showed me 100 different potential paths that I learned about through the experiences of all the students in my cohort. Listening to their experiences was extremely insightful for me.

It all comes down to applying yourself and putting yourself out there. Take that leap of faith. Because if you take it and put the effort into it, it is going to come back and reward you for it.