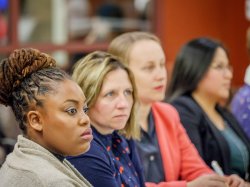 The New Jersey Department of Education releases the Educator Preparation Provider Performance Reports to provide data on teacher preparation providers and outcomes. These reports include hiring rates and performance information on newly certified teachers. The information provided on this page is taken from these reports. The full reports can be viewed on the New Jersey Department of Education website.

Number of Certifications Obtained and Employment

78% of Montclair State University completers who obtained two certifications in 2014-2015 and 68% of those obtaining one certification were hired in NJ public schools.

Three of the largest teacher certification programs at Montclair State University have high public schools hire rates for 2016-2017: 78% for Teacher of Students with Disabilities program, 75% of the Elementary School Teacher (Grades K-6) and 70% of Teacher of English program.

New Jersey uses multiple measures of performance to evaluate teachers. These include components of student achievement and teacher practice. The charts below summarize this performance data for novice teachers who completed a teacher preparation program at Montclair State University. The data is captured by the New Jersey Department of Education’s evaluation system for New Jersey public school teachers, AchieveNJ.

In 2017, 96% of all evaluated novice New Jersey public school teachers who graduated from Montclair State University were evaluated as “Effective” or “Highly Effective”.

Student Growth Objective is one of the two evaluated measures for Student Achievement. Teachers set Student Growth Objectives (SGOs) for their students at the start of the year and are assessed on whether those objectives are met at the end of the year. SGOs are academic goals for groups of students that each teacher sets with his or her principal and count for 15% of a teacher’s overall evaluation.

In 2017, 72.2% of all novice teachers received between 3.5 and 4.0 for their Student Growth Objectives accomplishment.

Student Growth Percentiles (SGP) measure student achievement gains within 4th-8th grade Language Arts and 4th-7th grade math classes. Using state standardized assessments, the SGPs compare the change in an individual student’s achievement from one year to the next to that of all other students in the state who had similar historical results. For teachers of tested grades and subjects, the median of their students’ change in achievement, or mSGP, counts for 30% of the overall evaluation rating.

Teacher Practice is measured by performance on a state-approved teacher practice instrument (e.g., Danielson, Marzano, etc.), which is used to gather evidence primarily through classroom observations. Tenured teachers have at least two required observations each year.