Congratulations to our newest class of distinguished alumni and friends for 2020. Join us as we celebrate these distinguished honorees who have been selected based on personal accomplishments, professional achievements, community service involvement and support of the mission of Montclair State University.

We invite you to learn more about our honorees:

College of the Arts
Andrew Freeman ‘84

For many, the Bar Mitzvah marks the coming of age, for Andrew it marked the start of a long path in marketing, public relations and concepts development. He grew up in New Jersey (exit 153A) and graduated from Montclair State University with a marketing degree, paying his way through school by working at a travel agency and performing in just about every community theater musical in the area. Name a show and he will sing the score for you. Making people happy and bringing enjoyment into their lives is Andrew’s driving force.

Along the way, he has worked with some of the finest restaurants, hotels, personalities and products in the world, and has loved every minute of it! He counts eating out every night and staying at wonderful hotels as part of his job duties and dedicates himself to doing a great job. (On a side note, Barry’s Bootcamp and yoga are his very close friends.)

Andrew learned the restaurant business by working through the ranks at several legendary New York venues. At Windows on the World, Andrew was vice president of public relations and marketing and responsible for the re-launch after the Trade Center bombing in 1992. At the Russian Tea Room, Andrew opened the Cabaret, which became the toast of the town after only six months. He was also lucky enough to spend six years as the vice president of public relations for the magnificent Rainbow Room working with restaurant legend Joe Baum.

Prior to opening af&co., Andrew was vice president of public relations and strategic partnerships for Kimpton Hotels and Restaurants. In total, he spent 10 years with Kimpton, launching over 40 hotels and restaurants as well as the global brand. During his tenure, Andrew helped spearhead the LGBT travel program, which has garnered numerous awards and positioned Kimpton as one of the top companies for LGBT employment in the country. In 2002, Kimpton became the first hospitality company ever to receive a 100% score on the Human Rights Campaign Foundation’s Corporate Equality Index and has continued to do so every year since.

In 2020, af&co. will celebrate its 15th anniversary and Carbonate was born! As the founder and spiritual visionary, Andrew has grown his two companies into highly respected lifestyle, restaurant and hospitality marketing, media relations and brand consulting firms headquartered in San Francisco and Cincinnati with clients across the country. With his amazing team of professionals, Andrew has developed and launched concepts for over 120 restaurants and hotels and provided ongoing marketing, public relations, and operations consulting for over 200 others. The firm has also created unique culinary events of all sizes from intimate dinners to food and wine festivals drawing over 10,000 people. Andrew does whatever it takes to help the agency’s clients achieve their goals.

A dedicated philanthropist, Andrew sits on the boards of CUESA, Dress for Success San Francisco (Advisory Board for 15 years) and The Richmond Ermet AIDS Foundation. He is a former board member of Meals on Wheels San Francisco, the San Francisco Convention and Visitors Bureau and the Anti-Defamation League, and was an advisor for the American Airlines LGBT committee. From 2016 to 2019, af&co. has been named by the San Francisco Business Times as one of the Top 50 LGBT-Owned Businesses in the Bay Area.

Andrew is a contributor to numerous industry magazines and blogs and guest speaker at industry conferences both in the USA and internationally. The af&co/Carbonate annual trend report is highly regarded and has garnered tremendous worldwide coverage. He resides in San Francisco with his gorgeous yorkie Tulip.

Dr. Waichungo was born and raised in Kenya. She joined The Coca-Cola Company in 2000 as strategic marketing manager in the Northern African Division based in Nairobi, Kenya. Subsequently, she held positions of increasing responsibility in innovation, strategy and business planning in roles that took her from Nigeria to Egypt, the U.K, South Africa and beyond. Prior to joining The Coca-Cola Company, Dr. Waichungo held product and consumer research roles at ConAgra Foods in Omaha, Nebraska, and Campbell Soup Company in New Jersey.

In her work, teaching, philanthropy and travel to more than 80 countries, Dr. Waichungo advocates for training the next generation of food scientists and closing capacity gaps so that all communities can enjoy safe, abundant food and economic opportunity.

Dr. Attanasio joined the faculty in the Department of Communication Sciences in 1966 (then the Speech Department) and retired in 2011. While teaching was his primary focus, he served as department chair and chair of the task forces on the New Student Experience, the Outcomes Assessment Program, and the Outcomes Assessment Coordinating Committee. For a time, Dr. Attanasio served as interim assistant dean of the College of Humanities and Social Sciences and as director of the New Faculty Program.

Dr. Attanasio has published on stuttering in American and Australian journals and has written, as author or co-author, chapters in several books on the subject. With Dr. Ann Packman, his colleague in Australia, he has published the book, Theoretical Issues in Stuttering, which is in its 2nd edition. He has presented on stuttering at professional conferences in the United States, Europe and Australia. He has published on statistics and research design in communication disorders. The study of history, initially as an undergraduate and afterward as a continuing interest, has informed his teaching and research.

Dr. Attanasio received Montclair State College’s Alumni Citation and Outstanding Faculty Awards. He was made an honorary research associate of the Faculty of Health Sciences, the Australian Stuttering Research Centre, the University of Sydney, Australia.

Marie Attanasio received her bachelor’s degree In English from Montclair State College. She was a teacher of English, first at Cranford High School, in Cranford, New Jersey, and then at Montclair High School in Montclair, New Jersey. She retired from secondary school teaching after a total of 25 years. Time between these positions was devoted to raising a son, Joseph, and the family pet whippets. Part time positions for 14 years included working as an E.S.L. and basic skills instructor in the adult education program at Montclair State College as well as in private industry.

While at Montclair High School, she played a role in establishing the ninth grade World Literature Course that became a model for introducing young students to a variety of cultures and their literature. Ms. Attanasio was one of the original team of teachers in the World Literature course embracing its diversity and inclusion principles and challenges. As the most senior teacher in the program, she was sought after to mentor a number of the ninth-grade English teachers. A strong advocate of inclusion in education, she welcomed special needs students into her classroom. Together, the heterogeneous group of students participated in all aspects of class work and discussions.

Ms. Attanasio is the recipient of several honors: Who’s Who Among American Teachers (multiple awards), the Josh and Judy Weston Award for Excellence in Teaching, and the Student Coalition Faculty Award for Extraordinary Dedication to Montclair High School. 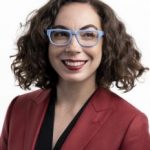 Dr. Erika Hamden is an astrophysicist and role model for STEM professionals. Being the daughter of Professor Dean Hamden, a long serving Physics and Astronomy faculty member at Montclair State, it was no wonder that she developed a love of the sciences. She received a bachelor’s degree in Astronomy and Astrophysics from Harvard College in 2006 and then a doctorate in Astrophysics from Columbia University in 2014. Her research focuses on measuring and mapping diffuse hydrogen around other galaxies and within star forming regions in our own galaxy. To do that, she builds ultraviolet telescopes that go to the stratosphere of space and develops sensor technology to make these telescopes more efficient.
Dr. Hamden’s professional journey highlights the importance of determination and she uses her experiences to inspire the next generation of STEM innovators. Before attending Harvard, she dropped out of MIT in her first semester, and has learned the importance of keeping going through difficult times. During the time between MIT and Harvard, she attend Montclair State and participated in a study-abroad program. In 2019, she was selected as an AAAS IF/THEN Ambassador to share the story of her STEM journey and the many ways in which she uses these skills to solve problems and create new possibilities for the future. She was also selected to be a 2019 TED Fellow, and spoke on the topic of “What it takes to launch a telescope.” Dr. Hamden is a frequent speaker at Montclair State and looks back fondly on her experience as a Weston Science Scholars Program Mentor from 2006 to 2012.
Dr. Hamden is currently an assistant professor at the University of Arizona. Before that, she was an NSF Astronomy and Astrophysics Postdoctoral Fellow and the R.A. and G.B. Millikan Prize Postdoctoral Fellow in Experimental Physics at the California Institute of Technology. Dr. Hamden was awarded a Nancy Grace Roman Technology Fellowship for her detector work in 2016. She also was awarded a Presidential Early Career Award for Scientists and Engineers in 2019 for her work on FIREBall, a UV telescope. This is the highest honor the U.S. government can bestow on an early career scientist. Her broad interests have also provided her some unique experiences. Dr. Hamden worked as a chef for a year and received a Pâtisserie Diploma from Le Cordon Bleu before beginning graduate school. She also has a serious yoga practice and is learning to be a pilot.

Michele Ansbacher holds a BA degree in economics and political science from Montclair State University and her MBA degree in ﬁnance from New York University. She retired from Prudential Financial where she was a corporate vice president in the Eastern Territory of Prudential Advisors.

Today, she is chair of the advisory board at the Feliciano School of Business and holds the position of Executive in Residence. She is an adjunct professor in the school’s MBA program, teaching courses on leadership and ethics and focused on building the next generation of business leaders.

John Fromhold is Chief Executive Officer of Hackensack UMC Mountainside. Since 2007, he has played an instrumental role overseeing the hospital’s transformation.

Recognizing the importance of network affiliations to clinical excellence and financial viability, he negotiated the joint venture formed by the Hackensack University Health Network, and LHP Hospital Group. This has resulted in a dramatic revitalization of the 125-year-old Mountainside hospital.

John’s recent achievements include the hospital’s successful transition in 2019 to Epic, considered the gold standard among electronic health records systems.

He was also instrumental in securing an agreement that paved the way for Mountainside to become a future satellite of the John Theurer Cancer Center, offering enhanced oncology services to the community.