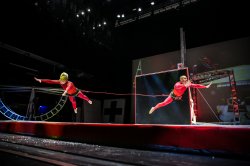 exhibit by appointment only August 27- September 3

Manipulating these tools, Streb dares to verge on acrobatics in performances such as FORCES and SEA (Singular Extreme Actions) or defy physics in works such as Revolution and AIR, and explode dance in works such as Human Fountain, Gizmo, and Passage.

Such work recalls the energy vested in investigations of light, space, and time by visual art movements like Fauvism, Cubism, and Futurism. Streb exceeds such approaches and those of later art movements.

Furthering the temporality and integration of art forms seen in Performance Art and the Art Happening, she has created lasting excitement in momentary physical movement she calls “PopAction.” Instead of drops of paint thrown or poured on canvas like work by Jackson Pollock, she is an action artist employing flying bodies landing or falling against mats and flexible walls.

An adventurous child born in Rochester, NY, in 1950, Streb studied dance, and eventually established STREB EXTREME ACTION in 1985 and SLAM (STREB Lab for Action Mechanics) in 2003.

She won the John D. and Catherine T. MacArthur Foundation “Genius Award,” and achieved international recognition for her thrilling artistry.

Streb’s story can be found in her autobiography, How to Become an Extreme Action Hero, and the Catherine Gund film, Born to Fly: Elizabeth Streb vs. Gravity.

Displaying notebooks, videos, photographs, drawings, and equipment related to Elizabeth Streb’s artistic creations, this exhibition is held in conjunction with Falling and Loving, an extreme action project commissioned and presented by PEAK Performances on stage at the Alexander Kasser Theater. Embodying over 30 years of avant-garde extreme art performance, Streb will reveal her insights and philosophy of art through experimental collaboration with theatrical director Ann Bogart and playwright Charles L. Mee, September 24-30, 2019, at Montclair State University.

Some of Streb’s past works: