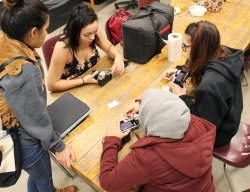 Thursday, November 2, 2017
The Holocaust in Metal and Stone: A Presentation by Sculptor Milton Ohring
The George Segal Gallery’s Annual Holocaust Remembrance Event, presented in collaboration with the Holocaust Council of Greater MetroWest

Milton Ohring was born in Stryj, Poland and graduated from the High School of Music and Art in New York. He obtained a doctorate in metallurgical engineering from Columbia University. Following his retirement as Professor of Metallurgy and Materials Science from Stevens Institute of Technology, he returned to his first love – art.

Saturday, December 2, 2017
Figuratively Speaking: Posing for George Segal for 15 Years
A Talk by Model Wendy Worth

Wendy Worth grew up in New York City. Early in her career, Andy Warhol became her mentor and arranged her job with the Contemporary Art collectors, Robert and Ethel Scull. When Robert Scull was being cast by George Segal, it was part of Wendy’s job to document it. It was also the start of a life-long friendship between Wendy and George.

Segal cast Wendy about 25 times, as well as drawing her in pastels and photographing her. An artist herself, Wendy was also a muse for the artist Lucas Samaras, and is the only human to have been wrapped by Christo!

Thursday, November 3, 2016
All That Jazz: Art / Philosophy / Action
A Panel Discussion moderated by Guest Curator Mimi Weinberg and featuring Stacy Renee Morrison, a photographer who teaches at the School of Visual Arts and Montclair State University, and Dr. John Peffer, a specialist in modern African art and photography and Associate Professor of Nonwestern and Contemporary Art History at Ramapo College.

Picture still taken from Rescue in the Philippines, produced and directed by 3 Roads Communications, consultation provided by Frieder Films, LLC

Invited artist for the George Segal Gallery’s annual fundraising exhibition, Art Connections 11, visual artist Cliff Tisdell will present a gallery talk, Influences and Inspirations, on February 12, from 1:00 – 2:00 p.m. at the Segal Gallery.  Tisdell has extensively exhibited his artwork throughout the country for 10-plus years and studied at the Art Students League, Parsons School of Design and Rutgers University.  The presentation will focus on his artistic process and influences, which include British pop art, cartoons, Viola Frey, Robert Rauschenberg and others.  Modern Living ( 2014), a mixed-media relief and Figure with Tire (2014), a carved wood sculpture, are currently on display at the Segal Gallery.

Proceeds from the annual fundraising exhibition, Art Connections, helped to make this program possible.  We would also like to thank the George Segal Advisory Board. The George Segal Gallery will present two gallery lectures on November 6.  Director and Curator of the George Segal Gallery, M. Teresa Lapid Rodriguez, will present Montclair State University Works on Paper Collection: History and Highlights.  The current exhibition, on display through December 20, is the first in a series to showcase artists from the permanent collection.  Rodriguez will provide an overview of the exhibition and focus on the significant contributions to mid-20th-century art by George Segal and Andy Warhol.

Admission to the program is free, but seating is limited.  Please RSVP by calling 973-655-6941 to reserve seats.  The George Segal Gallery is wheelchair accessible.

The George Segal Gallery, in partnership with the Holocaust Council of Greater MetroWest, welcomes guest speaker, Bob Max, for a special gallery talk on Veterans Day, November 11.  New Jersey native and WWII veteran, Max was taken prisoner during the Battle of the Bulge by the German army and was forced into a Nazi labor camp.  After being starved, brutalized and denied shelter, Max escaped and was later hospitalized for ten months.  George Segal Gallery Director and Curator, M. Teresa Lapid Rodriguez, will provide an introduction and link many of the themes that Max will speak about with the artwork of Ben Wilson (1913 – 2000), and George Segal (1924 – 2000).  Both artists explored themes of the Holocaust and anti-Semitism; Wilson through his abstract expressionist paintings and collages, and Segal through his sculptural installations.

Admission to the program is free, but seating is limited.  Please RSVP by calling 973-655-6941 to reserve seats.  The George Segal Gallery is wheelchair accessible.

The winners of the “Selfie with Segal Digital Photo Contest” will be announced December 17. Winners may pick up their prizes at the Gallery during the evening of the reception, December 18, 6:00 p.m.