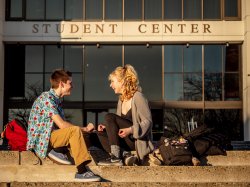 Most people would rather die than speak in public, and that isn’t an exaggeration. According to surveys conducted by the American Psychological Association, public speaking consistently ranks at the top of the list (above death!) as the number one fear in America. The stress over what to say, making a mistake, and being judged can cause every moment in front of a crowd to feel like the worst kind of torture. And whether we like it or not, it is impossible for any of us to go our entire lives avoiding the act of public speaking…especially us leaders. For a leader, public speaking is essentially the very first job requirement, and by far the most important and most necessary.

But public speaking doesn’t have to be so scary– in fact, it can even be fun! Most of what it takes to become comfortable speaking in public is confidence. That confidence comes from being prepared with knowledge, and not just the knowledge of what you’re going to say. The knowledge of who you are as a speaker can make it easier to speak, because it enables you to put on a character of sorts, rather than rely on yourself. By slipping into character, you can put more distance between yourself and the actual task of speaking, but you can still come across as genuine and comfortable. This speaking character doesn’t have to be so different from you, either. Sometimes, taking a small part of yourself and simply amplifying it to come across as stronger is a great way to create a “character” without being fake.

There are five major types of speaking styles.

Which one is best for you?

Former President Obama is an excellent example of a great public speaker. He is comfortable, relatable, and just nice to listen to. A Sage type of speaker presents information in a way that is logical and well-researched, while still interesting. The sage gives facts, and does not let their emotions run away with them, even if they do let their emotions come through. For the sage, the primary concern is letting people know what’s happening in a way they can understand. They simplify for their audience without being condescending. Many teachers and How-To workshop presenters are the Sage type. Knowledge and education are at the forefront of their presentations, and they speak in whatever way is most neutral-yet-inviting for their audience to digest.

A Wizard speaker wants to change the audience, and thereby change the world. A wizard wants to transform those who are listening into something positive. Wizards use anecdotes and emotion, relying on emotion to make their point, unlike the Sage. If a Wizard is presenting information, they are doing it in a way to elicit empathy and feelings, because they want people to really and truly believe what they are saying. The Wizard also wants people to take action; therefore, a Wizard always knows just what to say to get through to their audience. No matter who a Wizard is talking to, they can adjust their speech and body language to connect with their listeners on a deep level, and they rely on that trust to persuade their audience to do great things.

The Monarch is a speaking type that exudes strength and discipline. A Monarch will assure audiences and allay their fears or assert authority and inspire action just as well as each other. The Monarch is a confident speaker, and they leave no doubt as they speak as to who is in charge. Because of their confidence, the audience is reassured by what they are saying and trust in their words, because the Monarch holds themselves powerfully. A monarch has no fear of anything, and often inspires others to be fearless just by their example. A Monarch is focused on their points and beliefs, and are a steadying presence when addressing problems and offering solutions. They leave no questions behind.

The Jester speaking type is the most fun and entertaining of the speakers, but also the most difficult to perfect, because it relies on total comfort with performance. The Jester will take serious matters, and address them in a way that will make the audience laugh. Injecting humor into heavier subjects is this speaking type’s specialty, and they walk away from their audience leaving good vibes and smiles in their wake. People flock to this type because listening to them makes their day feel just a little better. Jesters never bore their audience, and can often get away with saying things that no one else can because their delivery is one of innocence and positivity.

Now that you know your speaking type, why not take it to the next level? Go out and speak to your public! Every type of speaker has something to offer, and you do too! All you need is the knowledge and the practice to turn you into a strong and powerful influencer. Your audience is ready to listen!