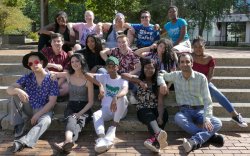 Ebony Jackson
Assistant Director of Office for Social Justice and Diversity
Pronouns: she, her, hers
973-655-7563
Student Center, Room 113E

Ebony Jackson has been working in higher education for over four years. Prior to coming to Montclair State University in February 2018, she served as the Coordinator of the Women’s Center at Ramapo College of New Jersey for a year and a half. She is dedicated to social justice programming, education and advocacy. She shapes her approach from an intersectional lens with influence from Audre Lorde’s quote: “There is no such thing as a single-issue struggle because we do not live single-issue lives.”

Ebony Jackson is a two-time alum of Montclair State University. In 2014, she received her BA in Linguistics and in 2016, her MA in Counseling with a concentration in Higher Education and Student Affairs. Sue Pasquino, BA
Program Assistant for Office for Social Justice and Diversity/Women’s Center
Pronouns: she, her, hers
973 655-4153
Student Center, Room 113

In the spring of 2016, Sue became the Program Assistant for the Office for Social Justice and Diversity and the Women’s Center at Montclair State University. She is very excited to be working more directly with students through assisting with running the Women’s Center on campus and other programs through the Office for Social Justice and Diversity. Sue is particularly excited to be able to utilize her Women’s and Gender Studies degree that she earned in the fall of 2015.

Jasiah Rodriguez, BA
Pronouns: he, him his

Jasiah is currently in his Master’s in Counseling program with a concentration in clinical mental health. He pursued this after having graduated from MSU with a bachelors in Family Science and Human Development.