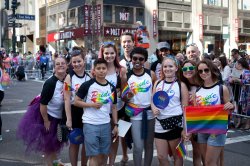 In 2012, President Susan A. Cole designated Tuesday, February 7, as Montclair State University’s Day of Unity in response to bias threats directed toward the LGBTQ community that occurred that same year on January, 26, 27 and 30. The day has since become one in which all members of the campus community are encouraged to attend and come together to celebrate our differences and re-confirm our commitment to creating a supportive campus environment for all.

The inaugural Day of Unity consisted of a Unity Rally in the Student Center Quad and was cosponsored by the Student Government Association, SPECTRUMS, the Greek community, the NAACP and Brotherhood, and several women’s groups in conjunction with the LGBTQ Center. Students posted signs around campus that read, “Hate is not a Montclair State value.” This phrase has since become ingrained in our community.

The second Annual Day of Unity took place in 2013 and included a full-day of community-enriching events followed by a keynote address in Memorial Auditorium by Lt. Dan Choi, coordinated by students groups, the LGBTQ Center, and other constituents within the Center for Student Involvement.

The third annual Day of Unity in 2014 featured a keynote address in the Student Center Ballrooms by James Clementi, brother of Tyler Clementi.

The fourth annual Day of Unity was in 2015 and showcased drag icons Shannel and Bebe Zahara Benet, from RuPaul’s Drag Race. Performances, personal stories, and a meet-and-greet took place on Monday, March 2.

The fifth annual Day of Unity was hosted on Thursday, February 4, 2016, and members of our community participated in the Dear World Project. The question posed to participants was this: “If you had one story to share with the world, what would you say?” Check out some of the photos.

The sixth and seventh Day of Unity celebrations incorporated our Social Justice Conference, providing opportunities for our campus community to engage with social justice and diversity topics to create a more inclusive and affirming environment for all. Featuring Dr. Saby Labor as our keynote speaker in 2018.

The eighth annual Day of Unity was hosted on Thursday February 7, 2019 featuring Little Miss Flint: Mari Copeny as a keynote speaker. This Day of Action also provided community members with the opportunity to take action with off campus community organizations.

Documents and Statements on Day of Unity