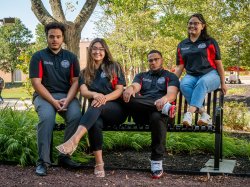 Ashon Lanada is the Executive President of the Student Government Association, Inc. He is a rising senior, majoring in Business Administration with a concentration in Management. He also has a minor in Business Relations and Professional Selling. As his undergraduate career is slowly but surely coming to a close, he has begun to realize year after year how important it is to get involved in different areas of the campus. He was involved as a general member of student organizations such as The Brotherhood La Hermandad, Latin American Student Organization, Black Student Union, Fashion Club, and Rise Up. He was also an executive board member for The Brotherhood La Hermandad for two years; Vice President and Public Relations (2019-20), and President (2020-21). Outside of student organizations, he was a University College Student Success Fellow, mentoring Pre-Major students as they embarked on the journey to an academic track that best suited them. Currently, entering his 3rd year as a Resident Assistant, where he creates a community of his own amongst the Residents on his floor as well as aid them in their residential experience throughout the academic year. As he embarks on this new stage of leadership, he is ready to see the Revival of the student life on this campus, and create new memories in this last dance.

“Life’s most persistent and urgent question is, ‘What are you doing for others?’”

Karla Farfan Miguel, is the Executive Vice President of the Student Government Association of Montclair State University Inc. She is from Lakewood N.J. Her major is Justice Studies with a concentration in Paralegal Studies and a minor in Spanish. She has been a part of the SGA since her freshman year when she started as a legislator. Since then she has worked as the Student Advocate under the SGA and at other capacities around campus such as ResLife and the Bonner Foundation. Her personal goal for this upcoming academic year is to aid communities of students on campus that feel like they are not well represented. She hopes to use my time in office to make meaningful decisions that create long-term change that benefit the entirety of the student body. She is a First Gen Latinx Woman who is open to help and change. If you have any questions, need help, or just want to get involved please send her an email!

Guillermo Estrada is a Senior at Montclair State University studying Public Health with a concentration in Health Systems Administration and Policy. Many people call him by his nickname “Gee”. He came in through the Educational Opportunity Fund program in 2018 and became a Peer Leader the summer of 2019. Guillermo started in the SGA as a Freshman as a legislator and worked his way up the ladder, he served on multiple Presidential Cabinets becoming the Director of Class One his sophomore year as well as the Director of Academic Affairs his Junior year. He also took part in organizational leadership as the Treasurer of The Brotherhood/La Hermandad for his Sophomore and Junior year. His main goal is to help set up Montclair State University to be creative and move outside of their comfort zone when it comes to student life. He is not just the voice but the image that represents all 16,000 undergraduates.

Christie Rosales is a senior at Montclair State University studying Psychology with two minors in Child Advocacy and Policy and Social Work. Previously Christie has worked a couple of on campus jobs prior to her role as Secretary, working with Ben Samuels Children’s Center, Alexander Kasser Theatre, and even as a Community Health Ambassador. Her involvement with SGA has been a new one, beginning as a Class II Director for the previous administration. Her goal for this year is to make sure all students are feeling heard and represented! Make sure to stop by her office with any questions or comments!!