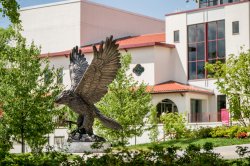 Have you ever noticed that the metal sculpture outside of the Center for Environmental and Life Sciences building? Did you know, although it appears to be abstract mass of aluminum over a concrete disk, the sculpture actually represents the constellation Ophiuchus? In May and July the sun casts a shadow on the concrete disk depicting the “serpent bearer.” 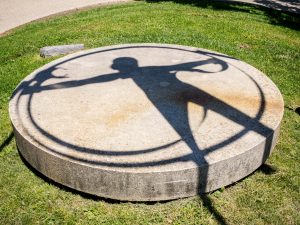 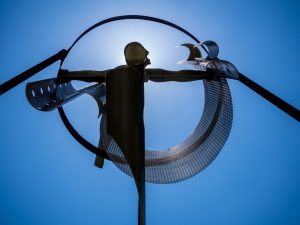 The sculpture was designed in 1988 by Mac Adams (a former Montclair State faculty member) with the assistance of Mary Lou West.

Ophiuchus is a large constellation said to represent a man in the coils of a snake. In Greek mythology, Ophiuchus represents the god of medicine and healing and was said to be the son of Apollo. The Centaur, Chiron, taught him about healing but Hades, the god of the underworld, didn’t like this. He asked his brother Zeus to kill him, which he did, but then put a figure in the sky to honor him.