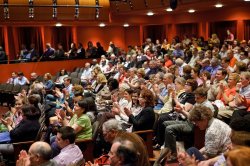 All showings are located in the brand new School of Communication and Media (SCM) building, in the SCM Presentation Hall, room 1040 [unless otherwise specified].

Events are free and open to the public

J-Walt is a director, interactive designer, filmmaker, performer, graphic artist, music composer, and VR pioneer. For three decades, he has been at the forefront of interactive art and computer performance, expanding the uses of computer animation into uncharted territories. His “Lucid Dreamscapes” performances combine aspects of animation, video games, music, theater, dance and architecture into a seamless new art form. He has performed for thrilled audiences around the US as well as in Europe, Asia, and South America.

In March of 2006, J-Walt won a Technical Academy Award for his development of a real-time pre-visualization system, and in 2003, he received a Themed Entertainment Award for a digital puppetry attraction, one of many digital puppet projects he’s developed over his career. He produced location-based video games for Sony. He was a founding member of Disney’s VR studio, which created a state-of-the-art virtual reality experience for Disney’s EPCOT center in 1995. MICHAEL HAUSMAN is a Unit Production Manager, Assistant Director, and Producer of feature films and movies for television. Beginning his career in business working at Merrill Lynch, Hausman developed an interest in art and decided to become a painter and photographer. After working with photographer Paul Caponigro, Hausman found a job at DuArt Film & Video where he produced four documentaries about painting, sparking an interest in filmmaking.

ISABEL SANDOVAL is a New York-based Filipino filmmaker. She has produced, written and directed two full-length features, including the Filipino-language Señorita (2011), which premiered in competition at the Locarno Film Festival in Switzerland and was nominated for Best Picture by the Young Critics Circle of the Philippines. Señorita also won her the Emerging Director Award at the 2012 Asian-American International Film Festival.

Zeva Oelbaum is an award winning producer and photographer. She recently produced Ahead of Time, a feature length documentary about centenarian journalist Ruth Gruber which premiered at the Toronto International Film Festival before garnering six Best Documentary awards. The film opened theatrically across the U.S. and was broadcast on Showtime Channel.

Oelbaum was also executive producer of the feature documentary, Rene and I. She comes to film from a career as a still photographer and her work has been extensively published in periodicals such as The New York Times Magazine.

Khurana was born in London, and immigrated with her family to New York City. In 2009, she was named as one of NY Women in Film & Television’s “Emerging Female Directors.”

Her work has been supported by the Tribeca Film Institute, the International Documentary Association, NALIP-Diverse Women in Film, Art in General, the National Film Development Corporation of India, Women in Film-Los Angeles, New York Foundation for the Arts, and Film Independent. Khurana is also the co-founder of Cine Qua Non Lab, an international development lab for narrative feature films, based in Mexico and the U.S.

Web Series Panel – So You Want to Produce a Web Series?

INDIE Web Series have become increasingly popular: they come short and shorter, with known actors and unknowns, funny and dramatic. How do they differ from features, shorts, and studio produced “TV” content? What challenges and/or limitations appear during production? What current funding/revenue streams exist and how do they work? Which distribution strategies work best? Can one make a career in low budget independently produced and distributed digital production?

Showing some of their work and discussing these issues will be:

producer of “The Other F Word” (available on Amazon)

community/social media manager at Stareable, a webseries community/aggregator and a director of several series of her own.

Pat O’Neill has been deeply involved in Los Angeles culture since the late 1960’s. A founding father of the city’s avant-garde film scene, an influential professor at CalArts and an optical effects pioneer, he is best known for his short works from the early 1960’s onwards which are highly graphic, layered and reflexive assemblages based on a mastery of optical printing techniques.

In O’Neill’s films boundaries fade, narrative collapses and layers of imagery draw the viewer simultaneously towards and away from linear meaning. O’Neill has combined found footage with experimental montage and compositing techniques to create a graphic language that deals with how different, often disparate elements assembled together in the frame relate to one another. His innovative optical techniques anticipated our digital landscape well before its time.

He will be showing his new film titled “Where the Chocolate Mountains”.

Robin Kampf is an award-winning writer, producer, director, cinematographer and editor with several years of experience in non-fiction documentary and news/features production.

Robin began her career in TV production working in local news and features while managing a team of producers for a local TV station. She has also worked in locations and management on several feature films including “Presumed Innocent”, “Bonfire of the Vanities”, “Jacobs Ladder”, among others.

Robin was recognized by the National Academy of Cable Programmers with four National Ace awards for producing as well as receiving “Producer of the Year” from the New Jersey State Cable Television Association. Robin also produced several award-winning public affairs programs for the New Jersey Secretary of State’s Office and the 10th Annual Governor’s Awards Television program airing live from the State Theater in New Brunswick.

Love Wins is a half-hour documentary that tells the story of two women, Jan (83) and Emily (87), who met and fell in love during a time when doing so was strictly taboo. During this time they raised a family of three children, while living in suburban New Jersey, completely in the closet. They’d travel to Provincetown each year, where for one week would be able to live their true lives. Their story has many layers to it, not the least of which is that Jan met Emily while Emily was working with Jan’s husband!

JAN OXENEBERG started her career as an independent filmmaker whose early lesbian themed short films have been shown around the world and were selected for preservation by the National Film Archive of Britain and the Academy of Film and Television Archive in Los Angeles. They are still in distribution. Her feature film THANK YOU AND GOOD NIGHT a hybrid of documentary and narrative, tied for the Audience Award at the Sundance Film Festival in 1991, won the Audience Award at the San Francisco Gay Film Festival and was distributed theatrically and shown at festivals all over the world.

George Griffin grew up in Tennessee, studied political science at Dartmouth, and has lived in New York City since 1967. He apprenticed in commercial cartoon studios, drew cartoons for East Village Other and Raw and was influenced by Robert Breer, Saul Steinberg, and Stan Vanderbeek. He has made over 30 short films, work that is essentially experimental and personal, including self-referential cartoons, narratives, documentaries and musicals (Head, Viewmaster, Ko-Ko, A Little Routine). He has published flipbooks and Frames, a selection of independent animators work, and taught at Harvard, Pratt, and Parsons. Griffin line-produced the Emmy-winning “L’Histoire du Soldat” for PBS and directed TV commercials for Colossal Pictures.

He has served on numerous juries (e.g. film installation at the 2007 Platform festival), written essays and reviews for Animation: an Interdisciplinary Journal, EnterText, Cartoons, ASIFA Magazine and Film Comment. Recent films include You’re Outa Here with music by Lorraine Feather, MacDowell: A User’s Manual, and Coal Creek. Many of his films are available for streaming at www.vimeo.com/geogrif. “Griffiti Archive,” a DVD of his work, is available at www.geogrif.com.

KATHY ROSE’s work has evolved from her early drawn animated films of the 1970’s,  through her unique, pioneering performance work combining dance with film in the 1980-90’s, to her current surreal performance video spectacles and installations, with influence from symbolist art and the Japanese Noh theater.
Rose received a Guggenheim Fellowship in Performance Art in 2003, and in 2005 was awarded a New York State Council on the Arts grant in Video (Media & New Technology).
Rose has toured extensively in live performance throughout the United States and Europe, giving performances at the Museum of Modern Art’s Cineprobe series, Kennedy Center, Serious Fun at Lincoln Center, as well as performances in Geneva, Helsinki, Amsterdam, Bern, Zurich, Hiroshima, and so on.
Kathy Rose has long been inspired by Japanese art and theater, including the work of Yoji Kuri, Kihichiro Kawamoto, Akira Kurasawa, as well as Butoh dance, the Japanese Noh, and Bunraku theaters. Rose is also an admirer of Fellini’s work, and artists such as Hannah Hoch, and Remedios Varo.

Co-sponsored by the Department of Theatre and Dance

Dorit Naaman & Livia Alexander will present their interactive project “Jerusalem, We Are Here”

[presentation begins at 7:15 pm, please bring your laptop or mobile device for the interactive portion]

Dorit is a documentarist and film theorist born and raised in Jerusalem. She teaches film and media at Queen’s University, Ontario, Canada, and splits her time between Canada and Jerusalem. Dorit developed a format of short personal documentaries, which she called DiaDocuMEntaRy. She has published on Israeli and to a lesser extent Palestinian cinema, focusing on gender, nationalism and militarism. She initiated Jerusalem, We Are Here as a collaborative platform that can map and tell the stories of a Jerusalem that is no longer visible.

Livia Alexander is a New York based curator, writer and Chairperson of the Department of Art and Design at Montclair State University in New Jersey. Alexander has curated and produced visual arts and film exhibitions at a wide variety of institutions, including the Tate Modern, the Museum of Modern Art, Brooklyn Museum, the Film Society of Lincoln Center, and Maraya Arts Centre, among others. She is a regular consultant to a variety of art organizations and galleries and is the co-founder of ArteEast, a leading international non-profit organization promoting Middle Eastern art. Her writings have appeared at Hyperallergic, Harpers Bazaar Art Arabia, Journal of Visual Anthropology, Framework and as part of edited volumes on film and art.

Erica Marcus was one of the first Americans to study and work in China after normalization of relations between the United States and China (1979). She began her film career in the early 1980s working in Hong Kong, China and Taiwan. Fluent in Mandarin Chinese, she assisted the Cannes award winning filmmaker Hu Jin Quan (胡金铨 or King Hu). Erica has since produced documentary films that have screened at numerous festivals including Sundance, Berlin and Locarno, and been broadcast on PBS and European TV networks.

Guangzhou, a.k.a. Canton, is southern China’s booming commercial center. A mecca of mass consumption, the city’s vast international trading centers attract more than half a million Africans each year. Most are doing business – in China to buy goods they’ll sell back in Africa. But some choose to stay, and for these Africans, China looks like the new land of opportunity, a place where anything is possible. But is it?

Featuring a dynamic cast of men and women from Cameroon, Kenya, Nigeria and Uganda, Guangzhou Dream Factory provides a rare glimpse of African aspirations in an age of endless outsourcing.