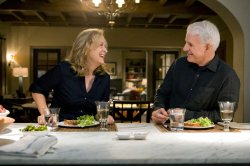 This season will bring the return of our Sunday Series, a four-part screening and lecture series with acclaimed film critic, Stephen Whitty, featuring films with none other than the award-winning actress… Meryl Streep!

Often described as the “best actress of her generation”, Ms. Streep is particularly known for her versatility and accents. Nominated for a record 21 Academy Awards, 31 Golden Globes and a slew of others, her five-decade body of work has proven her cross-generational appeal.

In every film portrayal, whether it be a strong, dominating fashion Queen (Miranda Priestly), a world renowned Chef (Julia Child), a free-spirited Mother (Donna Sheridan), or as the longest-serving British Prime Minister of the 20th century (Margaret Thatcher), viewers find themselves whisked away on that character’s journey.