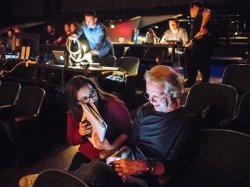 The New Works Initiative (NWI) is an Artist-in-Residence program and developmental platform in the Department of Theatre and Dance in Montclair State University’s College of the Arts. NWI’s mission is to bring together established and emerging playwrights, composers, choreographers, theatre-makers, and professional directors with Montclair State University theatre students to explore adventurous theatrical works.

The New Works Initiative is made possible through the generous support of Bob and Holly Gregory.

How to Mourn the Dead: A Tragedy in Flux
by Eric Marlin
Directed by Ilana Khanin

Two bros watch the dissident Antigone buried alive on national television, captivated by her martyrdom. A chorus of women, Antigones throughout the ages, observe, debate, and dispense with the men, to tell their own stories. A large-scale, explosively theatrical investigation of the allure of spectacle, the dangers of myth making, and the ease with which suffering becomes co-opted for personal profit.

Eric Marlin was featured in the January 2020 issue of American Theatre magazine’s Role Call: People to Watch by Amelia Merrill
As a part of his residency with Montclair State University’s New Works Initiative, he’ll present his play How to Mourn the Dead: A Tragedy (in flux) at Montclair February 20-23, with direction by Ilana Khanin.
While the forms of his work vary, Marlon says he can trace the “core concerns“ of his writing to a quote from Anne Carson, a translator of Greek tragedians: “Why does tragedy exist? Because you are full of rage. Why are you full of rage? Because you are full of grief.” Marlon says that this combination of “deep thinking and deep feeling” is the source of his new work, adding that he is “endlessly inspired by the new generation of writers who fearlessly explore their own rage and grief.

Grey Lady is, simply told, a love story and a story about a woman discovering her vocation. When Nantucket native Cady Hood learns that her husband has died on the battlefield in Antietam she disguises herself as a man to fight with the Massachusetts 20th Regiment. There she meets two men who change the course of the war for her. One, Ralph Lewis, awakens a deep sexual longing that she has never experienced before. The other, Nathan Hayward, teaches her how to be a nurse and eventually possibly even a surgeon. As the Civil War rages on, the consequences of Cady’s decision to go to war deepen and her safety and her secret are threatened.

Kate Mulley is a playwright, librettist/lyricist, producer, dramaturg and founding member of Vox Theater. Her plays and musicals have been developed and performed on four continents at theaters including Hayes Theatre Company, Luna Stage, Shanghai Dramatic Arts Center, Dixon Place, the Flea, Theatre503 and the Soho Theatre. Kate has been an Artist-in-Residence at Arteles Creative Center, a Playwriting Fellow at Shanghai Theatre Academy, and a Tennessee Williams Scholar at the Sewanee Writers Conference. She graduated from Dartmouth College with a degree in Theater and History, received an MA in Writing for Performance at Goldsmiths College, London, and an MFA in Playwriting from Columbia University. She currently lives in New York.
Dara Malina

2020/2021 NWI Artist-in-Residence: Seeking a playwright, theatre maker/deviser, composer/ lyricist or choreographer for a new full-length work in progress that has been partially developed but not yet fully produced. Potential commissions will also be considered. Artistic collaborators may apply as a team. NWI is particularly seeking stories and voices from under-represented communities in the theatre.

Spring 2021 Full Production in the main stage department season, venue and budget appropriate for the demands of the piece (minimum four-week rehearsal period).

Artist(s) fee to be determined by the scope of the project.

Submissions of Complete or In-progress Works:

Please submit proposal, artist’s statement, resume and/or CV, project description, cast breakdown, and a sample of the work (video, text, or other format). All submissions will be curated by the NWI Committee.

Please submit an artist’s statement, resume and/or CV, detailed project concept and description for the proposed work including projected cast size, and a representative complete work (text or video). Evidence of other produced work or work in development appreciated but not required.

DAUGHTERS OF THE REBELLION
by Guadalís Del Carmen
Directed by Melissa Crespo
Even though Katya and Fanya are sisters raised in the same rich and aristocratic home, their experiences are worlds apart. With their country on the cusp of a revolution, the sisters take separate paths to fight for their country’s future. Having the odds against them, both make drastic choices that will forever change their relationship. With one sister sacrificing her life and the other sacrificing her livelihood, the fate of their beloved country ultimately lays in their hands.


Guadalís Del Carmen
Currently based in NYC, Carmen’s first play, Blowout, was produced by Aguijón Theater in 2013. In 2014, she was one of eight early career playwrights to be chosen to form El Semillero, a playwright writing group curated by ALTA (Alliance of Latino Theater Artists) in residency at Victory Gardens Theater. My Father’s Keeper was developed through El Semillero and was a semi-finalist in Quick Silver Theater Company’s 2018 Playwrights of Color Summit.

Guadalís’ play, Tolstoy’s Daughters, was part of UrbanTheater Company’s 2015 R.A.W. (Real Aggressive Writing) Series. Tolstoy’s Daughters went on to be selected as a finalist in Quick Silver Theater’s Playwrights of Color Summit which culminated in a public staged reading in Geneva, NY in June 2016. In 2017, Tolstoy’s Daughters would go on to be selected as one of 50 Playwrights Projects Best Unproduced Latino/a Plays and received an Honorable Mention in the Kilroys List. Her play, Anacaona and Yemayá Taught Me… was a semi-finalist in The Playwrights Realm’s 2017-2018 Writing Fellowship and was originally written through The Brooklyn Generator. Guadalís has written for the One Minute Play Festival Chicago and NYC, CastandLoose Live! Not So Buenos Aires at Joe’s Pub, and Black Lives, Black Words Chicago. Guadalís is also a Seattle Public Theatre’s 2017 Emerald Prize nominee.

World Premiere of a new commissioned play by Jeff Talbott

People got it together to write the Constitution, so why can’t two student action groups get a single sentence on paper to form a charter? Finding the right words can be the hardest thing in the world. Two stories. One story. Their story. Our story. A thorny comic drama about getting things started.

Critics rave about Jeff Talbott’s recent premiere /i/ at the Pioneer Theatre:

“Talbott’s script is sharp and perceptive, savvy about the ways that technological advances inevitably come with consequences… While it might be unfair to say too much to a potential viewer about what “i” is about, it’s the kind of thought-provoking theater that’s exactly right for the kind of person who’s willing to turn themselves over to the artists.”

“Subtle and witty commentary on how the world interacts with technology and the possibilities and dangers of its evolution serve as an intriguing lead to the story, but the intense and emotional dialogue about the complexities of human relationships is what really connects the audience to her story and gives it meaning. Compelling…”i” offers a big truth for audiences to walk away with.”

“i” is a complete delight… Surprising for its originality and intriguing for its structure, “i” is deeply gratifying theater.”

“Gripping… “i” defies genre labeling and yet feels familiar; it is engaging and thought-provoking… The most moving, accurate and impassioned portrayal of absolute heartache that I have ever seen on a stage… It isn’t every day a new play makes you really consider some heavy and heady questions, and it’s even rare when questions are posed without an agenda. “i” asks a lot, but it never tells you what you should think or how you should feel.”

Jeff Talbott’s play The Submission was the inaugural recipient of the Laurents/Hatcher Award and was produced off-Broadway by MCC Theater; it went on to receive the Outer Critics Circle John Gassner Award for New American Play.  The Gravedigger’s Lullaby received its world-premiere production in March 2017 off-Broadway with TACT at Theatre Row.  Three Rules for the Dragon and A Public Education were both finalists for the O’Neill Playwrights Conference.

His plays (including i, Elliot, All the Stars in the Midnight Sky and How to Build a City) have received workshops and readings at MCC Theater, Premiere Stages, Chicago Shakespeare, Pioneer Theatre, TACT, Crowded Outlet and Route 66.  He writes musicals with composer Will Van Dyke.  Their work includes:  Imagine Harry (NAMT Festival of New Musicals), Wintersong (Goodspeed’s Johnny Mercer Writers Colony) and the just-completed Seven Broken Hearts.  They have released an EP (A View of the River) and a single (A New Year, recorded by Annaleigh Ashford), both available on iTunes or wherever digital music is sold.  Jeff is a member of TACT and graduated with honors from the Yale School of Drama.  www.jefftalbott.com

Wes Grantom (Director) is thrilled to develop brand new work with Jeff Talbott after collaborations on four of this other plays.  Recent directing credits include Toxic Avenger by David Bryan and Joe DiPietro at Pittsburgh CLO, Lone Star Spirits by Josh Tobiessen with Crowded Outlet, Eager to Loseby Matthew-Lee Erlbach at Ars Nova, The Cloud by Matt Moses, The Steadfast by Mat Smart, Mine by Bekah Brunstetter for Slant Theatre Project.

Wes has a number of Broadway credits as resident and associate director, working alongside James Lapine, Emma Rice, John Rando, Anthony Page and Rufus Norris. He is a recipient of multiple Drama League Fellowships, a member of Lincoln Center Directors Lab, a graduate of the University of Evansville and the Artistic Director of Crowded Outlet, based in Queens.

2019/2020 NWI Artist-in-Residence: Seeking a playwright, theatre maker/deviser, composer/ lyricist or choreographer for a new full-length work in progress that has been partially developed but not yet fully produced. Potential commissions will also be considered. Artistic collaborators may apply as a team. NWI is particularly seeking stories and voices from under-represented communities in the theatre.

Artist(s) fee to be determined by the scope of the project.

Submissions of Complete or In-progress Works:

Please submit proposal, artist’s statement, resume and/or CV, project description, cast breakdown, and a sample of the work (video, text, or other format). All submissions will be curated by the NWI Committee.

Please submit an artist’s statement, resume and/or CV, detailed project concept and description for the proposed work including projected cast size, and a representative complete work (text or video). Evidence of other produced work or work in development appreciated but not required.
SUBMISSION DEADLINE: December 1, 2019
Send submissions to msu.nwi@gmail.com