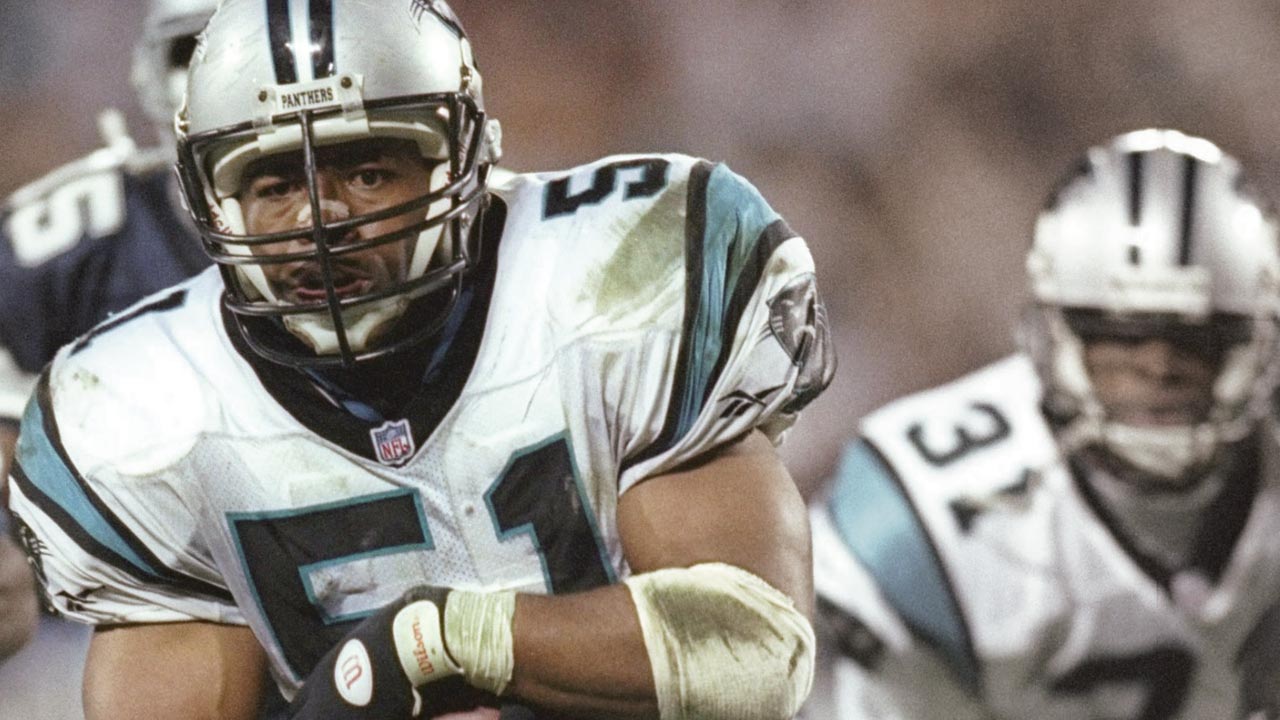 By Steve Politi - Photos of Sam Mills Jr. courtesy of the NFL

It still happens all the time. Sam Mills III might be in a restaurant in Charlotte, North Carolina, or at a shopping mall, or walking around the stadium where his father once starred as an NFL linebacker.

A fan will approach, always politely – this is the South, after all – with a smile and a story. They almost always want to share how Sam Mills Jr., one of the greatest athletes ever to graduate from Montclair State, had touched them personally, either with his fierce play on the field or his kindness off it.

The son sees it in other ways, too. In the Mills jerseys that are still everywhere in North Carolina’s biggest city, even nine years after his shocking death from intestinal cancer. Or in the way families will pose for photos in front of the statue bearing his father’s likeness outside the stadium.

This always makes the younger Mills laugh. The statue depicts an enormous, towering figure, when his father was anything but. Sam Mills Jr. was just 5-foot-9, defying the odds at a position that usually requires a player to be half a foot taller or more to have a shot in the pros.

But this, of course, was part of his appeal. 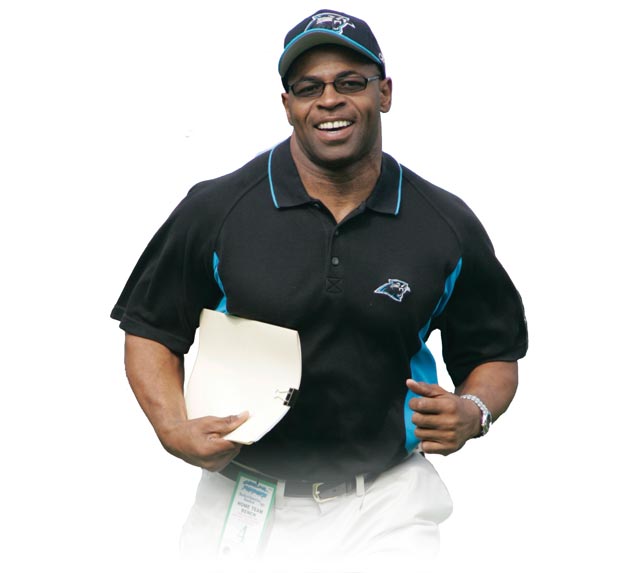 I think people gravitated to him because of his path to get to the NFL,” Sam Mills III says over the phone. “Here he was, not even thinking he was going to play college football, then to play at Montclair thinking, ‘This is it.’ Then to get a break in the (now-defunct) USFL, then finally making it to the NFL.

“And he never forgot that journey,” the son says. “That journey helped make him who he was.”

Mills III, who also played at Montclair State, is trying to honor that journey now, in the way his father would most appreciate: making his slow and steady climb through the coaching profession through hard work and determination. He is an assistant defensive line coach for the Carolina Panthers, a glamour-free job that requires hours spent studying film and grading players.

But the 36-year-old isn’t afraid of a steep climb. He learned that from his father.

“Sam was a guy who got the most out of his God-given ability,” says Denver Broncos head coach John Fox, who was the Panthers’ head coach while Mills was on staff there. “A lot was made of Sam’s height and size, yet he competed at a professional level. He was a guy who wasn’t blessed with a lot of ability for his position, but he got the most out of himself, and people tend to gravitate to that.”

“Sam was a guy who got the most out of his God-given ability.”

It was 35 years ago this fall when Mills, known more for his exploits as a wrestler at Long Branch High and shunned by the big football programs, became a dominant linebacker for Montclair State and an All-American.

How good was he? Maybe one game sums it up best: In a 7-0 victory over Central Connecticut, not only did Mills have 22 tackles, but he returned an interception for a touchdown for the only score in the game. Other details fill out Mills’ legacy at Montclair State: His 501 career tackles for the team set a school record and his jersey No. 62 is one of only two numbers ever retired by the University.

Still, even after he was named an All- American in 1979 and 1980 and despite being a three-time collegiate defensive player of the year in New Jersey, no NFL team would draft him. He tried out for the Cleveland Browns, but got cut. He tried out for the Toronto Argonauts in the Canadian Football League, but he was cut there, too. He went home to New Jersey and started teaching photography and coaching football at East Orange High, waiting for another shot.

“He was frustrated,” says Rick Giancola, who is in his 32nd season as head coach at Montclair State. “He had confidence in his ability, but he was frustrated. He’d say, ‘Just give me a shot. Give me a chance, and if I’m not good enough, I’ll walk away.’”

He got that chance when a rival league to the NFL was formed. The United States Football League (USFL) was a short-lived endeavor, but it gave Mills another shot at a football career. He earned a spot on the Philadelphia Stars roster and led them to two USFL championships, and when his coach Jim Mora landed an NFL job with the New Orleans Saints, he brought Mills with him.

He no longer had to convince people he could play. Mills earned four Pro Bowl appearances with the Saints, anchoring a defense that was one of the best in the league at the time.

“People always ask me, ‘Who’s the best player you’ve ever coached?’” says the 79-year-old Mora, whose coaching career spans 40 years. “And I always say, ‘Sam Mills.’ I was fortunate to coach a lot of players, but Sam Mills was No. 1 on that list.”

Mills signed with the Carolina Panthers in 1995, an expansion team that was looking for a player who could connect with the fan base. That quickly became Mills, the only player to start every game during the team’s first three seasons, including the surprising 1996 team that went to the NFC Championship Game.

“He was different than other people because he was a professional athlete, but if you didn’t know, you wouldn’t know,” Sam Mills III says. “He was not a young college stud. He was an older guy, with glasses, a family man. He was just like them.”

He retired after the 1997 season, and after a brief attempt to work in the Panthers’ front office (“He hated sitting at a desk,” says Giancola), he broke into coaching. He seemed like a natural, someone who could motivate both the stars and scrubs alike. Then came the stunning news in 2003: He had intestinal cancer.

Doctors gave him just a few months to live, but he refused to leave his job. He’d show up the day after a draining chemotherapy treatment. The night before a home playoff game against Dallas in 2004, Mills gave an emotional speech that became a rallying cry for the entire franchise. 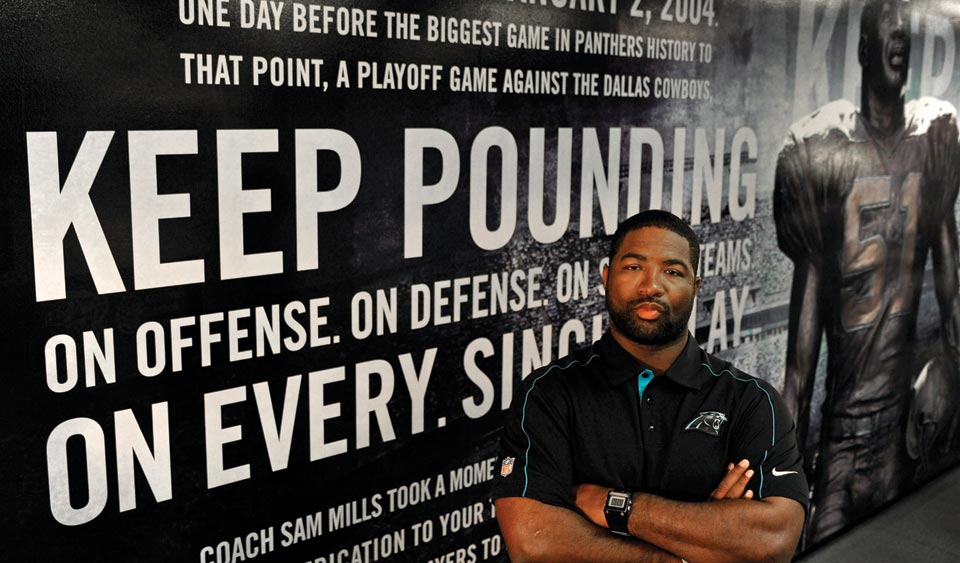 Sam Mills III in front of a tribute to his father. Photo by Jeff Siner, The Charlotte Observer

“Keep pounding,” he told the Panthers who went all the way to the Super Bowl that season before losing to the New England Patriots. Mills followed that mantra until April 18, 2005, when his body finally gave out. He was only 45.

Hundreds of mourners, including many NFL stars and coaches, showed up for his funeral in New Jersey, where former Saints linebacker Rickey Jackson remembered him as “the toughest little man I’ve ever seen in my life.”

When he posthumously became the first Montclair State player to be inducted into the national College Football Hall of Fame in 2009, his son accepted the award on his behalf – 17 years after the University had enshrined Mills in the Montclair State Athletic Hall of Fame.

They remember him still at Montclair State and in Charlotte, where Sam Mills III chases his own coaching career in a way that would make his father proud. The hours are long. The competition for jobs is stiff. But Mills III goes to work every day knowing his old man set quite an example for how to beat the odds.