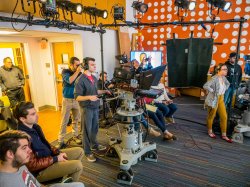 Television is a fun, fast-paced and creative industry. In our program, you will develop your talent with the guidance of our experienced faculty. Learn the behind-the-scenes process that goes into producing television and digital media content. You will get hands-on experience in every aspect of the creative process, from the social media strategies that are used as promotional tools, to script writing, directing and producing.

The coursework will prepare you to create compelling sound design for all forms of media as well as become proficient in audio production techniques.

Learn how to write, produce and direct solid media content for the fast-paced industry of sports media.

In the program, you will learn scriptwriting and storyboarding, live-action shooting, digital editing and live webcast streaming – and develop video projects, newscasts, commercials, dramatic programming, and more for both the big-screen TV and hand-held devices.