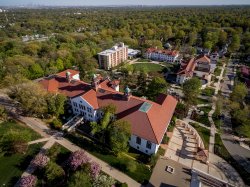 Three faculty members were resolved as Professors Emeriti during the recent Montclair State University Board of Trustees meeting on April 11. Two of the three were present and were honored at a luncheon immediately following the meeting. Professor Rolf Sternberg, was also honored in recognition of his induction as Professor Emeritus at the Board of Trustees meeting on December 15, 2017. The luncheon, held bi-annually, was attended by 28 Emeriti faculty, guests and University administrators.

The luncheon began with remarks from Vice President of University Advancement, Jack Shannon. Shannon thanked our Emeriti faculty for their years of service and support as advocates and ambassadors for the University’s educational mission. Shannon shared the sad news of the recent passing of Professors Emeritus Suresh Desai and Gerard Caracciolo, and asked for a moment of silence to honor them. Shannon continued his remarks, providing updates on the construction on campus buildings— such as College Hall and Partridge Hall—the success of the Annual Scholarship dinner, and the upcoming Annual Giving Day event on April 19.

We invite you to view photos from the luncheon. The Office of the Provost and Division of University Advancement look forward to continuing to host events and activities for Emeriti faculty at Montclair State.

Please join us in congratulating our newest inductees as Professors Emeriti! Below you can read some of the focal points of their careers at Montclair State, including their years devoted to the college, published scholarly articles and books, awards, and achievements.

Professor Ada Beth Cutler has served Montclair State University for twenty-three years. She was Dean of the College of Education and Human Services from 2000 to 2012, spearheading the development of three PhD programs, five master’s programs, and four bachelor’s programs. She also led the creation of two highly successful and influential Centers within the College of Education and Human Services: the Center for Autism and Early Childhood Mental Health and the Center for Research Evaluation on Education and Human Services. Cutler chaired the New Jersey High Education Task Force, the New Jersey Committee on Elementary Teacher Preparation, and co-chaired the New Jersey Abbott School Improvement Task Force. She has published various articles, chapters, and technical reports regarding education. She is recognized nationally and internationally for her contributions to Teacher Education, having received the Lifetime Achievement Award from the New Jersey Secretary of Higher Education, as well as the Executive Woman of the Year in New Jersey Award.

Professor Benjamin Franklin Hadis served Montclair State University for forty years. He acted as the Director of International Studies (1989-2017), and as the Director of the study abroad and student exchange programs (1989-2012), inspiring students to expand their cultural horizons. Hadis represented the University at the New Jersey State Consortium for International Studies and coordinated the State Consortium as its Executive Director (1991-2002). He also served as the State representative to the nationwide College Consortium for International Studies (CCIS), a member of the Executive Committee, and as the Chairperson of its Academic Committee. For over fifteen years he headed the department’s Undergraduate Curriculum Committee and served on the College and University Undergraduate Curriculum Committees as both a member and deputy Chair. Hadis was the Vice-President of the Montclair State University Senate; served on the University General Education Committee, including its ad-hoc Assessment Committee; and has published articles that are among the most highly cited works in study abroad literature. His recent work on the enhancement of generalized social trust by transparency and social protection from risk, is garnering international attention.

The Emeriti faculty that were not in attendance are listed below:

Professor James G.S. Yang served Montclair State University for thirty-five years as a Professor of Accounting. Yang has taught over 4,500 students and participated in various committees across Department, School, and University levels. He is the founding faculty member for Montclair’s chapter of the Beta Gamma Sigma National Honor Society. Yang’s scholarly contributions include the publication of 125 refereed journal articles and the presentation of 35 papers at academic conferences. His academic strides earned him the New Jersey Business and Industry Association’s Bright Idea Award a total of four times. He has also organized multiple training programs for government officials and executives from the People’s Republic of China; international conferences with partner institutions in Beijing; and served the CPA society by offering seminars and lectures to accounting professionals.

Professor Rolf Sternberg served Montclair State University for forty-six years, and was granted Emeritus Status at the Board of Trustees meeting on December 15, 2017. Sternberg mentored bachelors, masters, and doctoral students alike in the fields of Geography, Urban Studies, Environmental Studies, Sustainability Science, and Environmental Management. He served as a member of the Earth and Environmental Studies Personnel Action Committee, the Library Acquisitions Committee, and the University Facilities Committee. He is an esteemed scholar, having been published widely on topics such as hydroelectric power, sustainable energy, the impact of energy generation on the environment, and the role of energy in geopolitics. He also acted as a book reviewer for academic presses in the United States and abroad, organized sessions at professional conferences, and presented his scholarship at national and international conferences.