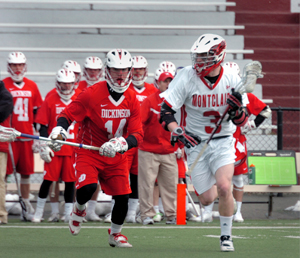 Montclair State again proved to be the school to beat in the Skyline Conference as both the men’s and women’s lacrosse teams captured league titles for the fourth season in a row. The men won their fifth straight championship while the women earned their seventh title in eight years.

The men’s team outscored its Skyline foes 102-20 and went unbeaten in conference play for the fourth time in the last five years. After claiming the Skyline Conference Tournament title, the Red Hawks earned a trip to the NCAA Tournament for the fifth time in program history.

All 10 Montclair State starters were named to the Skyline Conference All-Star Team, while head coach Chris Kivlen was named Coach of the Year for the second consecutive season. Leading the team was junior goalkeeper Michael Dorn, the league’s Co-Player of the Year, along with senior defender Mike Lade, who were both also named All-Americans by the United States Intercollegiate Lacrosse Association. Lade also joined teammates Jack Skeels and Ken Bogert in the association’s North-South Senior All-Star Game, marking the first time Montclair State sent three players to the game in the same year.

For the women’s team, the conference championship capped off a winning season in the Skyline Conference. Montclair State posted a 55-3 mark in the last eight years of regular season play, making the tournament title game each season.