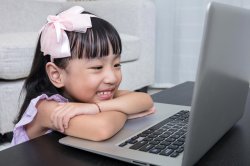 How to Best Interview Child Eyewitnesses

Interviewing children remotely could solve the challenges facing many jurisdictions, especially those lacking the resources and expertise to skillfully conduct sensitive interviews of child eyewitnesses. Psychology Professor Jason Dickinson has received a National Science Foundation (NSF) grant to assess the impact of face-to-face and remote interviewing of child eyewitnesses.

The ultimate goal is to help the legal system make better decisions where children are involved.

This is Dickinson’s fourth NSF grant supporting his research on forensic interview aids with children, including the use of drawings of human figures to elicit disclosures of abuse from young children and whether allowing children to draw during forensic interviews is a distraction or a memory aid.

“Eyewitness evidence is easy to contaminate, so basically my research looks at the best ways to collect that evidence so professionals can make the best and most accurate decisions possible,” says Dickinson.

Dickinson’s new project is one of the first to explore whether interviewing child witnesses from afar by computer presents an effective alternative to face-to-face, in-person interviews. “When questioned properly, children can make remarkable witnesses. However, they can be very suggestible,” explains Dickinson, who is also the director of the Robert D. McCormick Center for Child Advocacy and Policy at Montclair State.

The University is leading the three-year, $311,753 project, with Dickinson serving as a co-principal investigator with Debra Poole of Central Michigan University.

According to Dickinson, remote interviews could offer distinct advantages such as reducing investigative response time, sparing investigative resources and accelerating case disposition. “It could aid investigators in their efforts to reach children in out-of-the-way locations,” he predicts. “However, the ability of remote interviewing to elicit eyewitness evidence from children has not been sufficiently tested.”

The team, which includes Assistant Professor Nicole Lytle of the Center for Child Advocacy and Policy, will do just that by comparing the effectiveness of face-to-face interviews with that of computer interviews. “The ultimate goal is to help the legal system make better decisions where children are involved,” Dickinson says.

In addition to advancing the field of forensic interviewing, the project will help to train dozens of University students who will help collect data. “Projects like these are how we train the next generation of scientists,” says Dickinson.