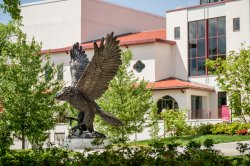 My research focuses on 19th-century novels from Russia, Western Europe, and the United States. I’m particularly interested in how modern fiction intersects with other spheres of cultural production, including medicine, visual art, and religion. I have published two books: The Real and The Sacred: Picturing Jesus in Nineteenth-Century Fiction (University of Michigan Press, 2014); and Alter Icons: The Russian Icon and Modernity (Penn State Press, 2010). My publications include articles on Chekhov and medicine as well as articles and book chapters on Tolstoy, Dostoevsky, Proust, Vasily Pelenov, and Lew Wallace.

Caroline Howell is the Interim Program Assistant for the Department of Medical Humanities.

Chris Herrera (associate professor of philosophy) received his PhD from the University of Oklahoma. His research interests include research ethics, the philosophy of sport, and the philosophy of science. Courses he regularly teaches in the Department of Philosophy include: Theoretical and Applied Ethics, Logic, Philosophical Issues in Biomedical Research, and Ancient Philosophy.

Dr. Kirk Johnson, assistant professor, teaches courses in Medical Humanities, Bioethics, Global Issues, Philosophy and Religion. He received his Master of Divinity (MDiv) from Drew Theological School and his Doctorate in Medical Humanities (DMH) from Drew University. He is a member of the American Society of Bioethics and Humanities and The New York Academy of Medicine. He serves as a member of the Atlantic Health Systems Bioethics Committee. Dr. Johnson is the former Assistant Director of the Medical Humanities program at Drew University and a fellow emeritus of The American Heart Association’s Multicultural Initiatives Leadership Fellowship Program. His published research includes articles on racial fear in COVID-19; racial equity pedagogy and training; and prayer as healing. His monograph Medical Stigmata: Race, Medicine, and the Pursuit of Theological Liberation was published in October 2020 by Palgrave Macmillan.
Minji Lee

Minji Lee, assistant professor, holds an MA from Seoul National University and a PhD in Religion from Rice University in Houston, Texas. She joins the Department of Religion after serving as a Visiting Scholar in the Medical Humanities Program at the University of Texas Medical Branch at Galveston. Dr. Lee specializes in the study of medicine in relation to cultural practices and belief systems – including women’s health, reproductive issues, and comparative analysis of alternative medicine in Korea and the United States. She brings with her an active research agenda, having produced several peer-reviewed articles and conference papers, such as “Woman’s Body In-Between: The Holy and Monstrous Womb in Medieval Medicine and Religion” and “The Me-Too Movement and the Church’s Reaction in Korea.” Dr. Lee also brings a demonstrated record of excellence in pedagogy and will teach courses in both the Department of Religion and the new Medical Humanities major in the College of Humanities and Social Sciences.

Maria Lupo, MFA, MA, ATR-BC is a Board-Certified Art Therapist and Certified Dementia Care Practitioner. Ms. Lupo is currently a Doctoral Candidate at Drew University in Medical Humanities. She received a BFA at Rutgers University, NJ; an MFA at Hunter College, working on sculpture; and a Master of Fine Arts in Combined Media at CUNY. Ms. Lupo completed her Post-Masters Specialization in Art Therapy from Caldwell University and holds a second master’s degree in Counseling Psychology. In addition, Ms. Lupo developed the Healing Arts Program at Atlantic Health System focusing on patients, staff and their families. Ms. Lupo has presented her signature programs at The Mayo Clinic, NJ Medical School and many conferences on topics such as Paint your Pain; Healing Voices: the Power of the Narrative; and The use of medical equipment in artwork as a way to heal. As the recipient of the NJ State Council on the Arts Fellowship award, Lupo is also a practicing artist focusing on mixed media works and eco-art installations. Her artwork is included in many public and private collections.

Lois Oppenheim is University Distinguished Scholar, Professor of French, and Chair of the Department of World Languages and Cultures. She is also Scholar Associate Member of the New York Psychoanalytic Society and Institute. Dr. Oppenheim has authored or edited fifteen books, including, among the most recent, For Want of Ambiguity: Order and Chaos in Art, Psychoanalysis, and Neuroscience (Bloomsbury, 2019, co-authored), Dear Mr. Beckett (Opus, 2016), and Imagination from Fantasy to Delusion (Routledge, 2013), awarded the Courage to Dream Prize from the American Psychoanalytic Association. Other recent books include Psychoanalysis and the Artistic Endeavor and A Curious Intimacy: Art and Neuro-Psychoanalysis. In addition, Dr. Oppenheim has published over 100 book chapters and articles on creativity, neuropsychoanalysis, and topics in French literature and philosophy.