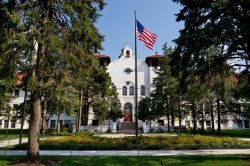 Lois Oppenheim, professor of French and chair, received a PhD from New York University. Her research interests include: modern and contemporary French literature, critical theory, psychoanalysis and the literary and visual arts, and creativity research. She is also a specialist in the work of Samuel Beckett. Oppenheim teaches courses including Twentieth Century French Literature and French Civilization of the 19th and 20th Centuries. Her most recent books include For Want of Ambiguity: Order and Chaos in Art, Psychoanalysis, and Neuroscience (co-authored, Bloomsbury, 2019); Dear Mr. Beckett: The Publisher’s File; Psychoanalysis and the Artistic Endeavor: Conversations with Literary and Visual Artists; Imagination from Fantasy to Delusion (awarded the 2013 Courage to Dream Prize from the American Psychoanalytic Association); and The Painted Word: Samuel Beckett’s Dialogue with Art.

Kathleen Loysen, associate professor and deputy chair, received a PhD in French Literature from New York University. Her research interests include: the French short story of the 15th through the 17th century, as well as a more broad focus on late medieval, Renaissance, and classical French literature and civilization. She teaches all levels of French including courses in translation, conversation, composition and grammar, as well as early modern literature and civilization.

Enza Antenos received her PhD in Italian Studies from the University of Toronto (Canada). Her research interests include emerging technologies, Made in Italy and innovative, cross-functional educational pathways for world languages. In addition to being the student advisor for Italian, she is director of the newly approved joint degree program in Language, Business & Culture. She teaches lower level language classes and courses in culture, business, linguistics, and pedagogy, as well as coordinates the Italian teacher education program, and supervises the cooperative education program.

Andrea Dini, associate professor, received his PhD in Italian from the University of Wisconsin-Madison. His research is in Medieval and 20th-century Italian literature. He teaches all levels of Italian language and literature and collaborates with the Honors Program and the GLBTQ Studies minor. He has co-authored several editions of McGraw-Hill’s textbook Prego! and has published essays on Pasolini and Dante, Petrarch, Pavese, Calvino. His book Il Premio Nazionale Riccione 1947 and Italo Calvino was published in 2007. In 2014 he co-authored Approaches to the Teaching of Petrarch’s Canzoniere for the Modern Language Association. For further details, please refer to his profile page.

Elizabeth Emery, professor of French, received a PhD from New York University. Her research interests include: medieval and 19th-century French literature and cultural studies; the reception of medieval art, architecture and literature in nineteenth and 20th-century Europe and America; early photojournalism, celebrity interviews, European and American writer house museums; naturalism, decadence, mysticism, cabaret culture, 19th-century French theater; the collection and study of Asian art in 19th-century France; and global food politics and sustainability studies. She teaches a variety of courses related to French language, literature and culture, with particular emphasis on the medieval period and the 19th and early 20th centuries.

Teresa Fiore, professor and Inserra Endowed Chair in Italian and Italian American Studies, received her Ph.D. in Literature at the University of California, San Diego. Her research and teaching are in 20th/21st-century Italian literature and cinema, migration to/from Italy, and Italian American culture. She is the author of the award-winning book Pre-Occupied Spaces: Remapping Italy’s Transnational Migrations and Colonial Legacies (Fordham UP, 2017), the editor of the 2006 issue of Quaderni del ‘900, devoted to John Fante, and the co-editor of a special section of the Journal of Modern Italian Studies (“Italy and the Euro-Mediterranean ‘Migrant Crisis,’ 2018). Fiore has also published numerous articles and book chapters in Italian, English, and Spanish. She coordinates a regular program of cultural events and educational initiatives on campus: montclair.edu/inserra

Jefferson Gatrall, associate professor and coordinator of the Russian Program, received a PhD in Slavic Languages and Comparative Literature from Columbia University, New York City. He advises all students in the Russian and Russian Area Studies Minors and teaches all levels of Russian language, literature and culture. His research focuses on 19th-century novels from Russia, Western Europe and the United States. His book The Real and The Sacred: Picturing Jesus in Nineteenth-Century Fiction was released in 2014 by University of Michigan Press, and he is the co-editor of Alter Icons: The Russian Icon and Modernity (Penn State Press, 2010).

Thomas Herold, associate professor, received his PhD from Harvard University in German Literature. His research interests include: 19th and 20th century German literature, German film, narrative theory, literature and philosophy, literary Anti-Semitism, and religion and literature. In addition to German language courses at all levels, he teaches German literature and civilization courses such as Nazi cinema and propaganda. Dr. Herold is the coordinator of the German Program.

Pascale LaFountain, associate professor, received a PhD from Harvard University in Germanic Languages and Literatures. Her research interests include: gender and sexuality in German literature and performance, theories of body and mind, German literature 1700-present, 18th-century French literature and culture, theater studies, and German film. She teaches a range of courses in German and French language and literature including 18th-century French intellectual history and German graphic novels.

Daniel Mengara, professor of French, received a PhD in Anglophone Studies from the University of Nice-Sophia Antipolis. His research interests include: African civilization and literature in French and in English, Diaspora Studies, Postcolonial Studies, African Sociolinguistics and the French language, Comparative Gender Issues, Issues in Language Acquisition and Teaching, General Literary and Cultural Issues, Literary Theory and Criticism, Comparative Literature, and Africa and the West. He teaches all levels of French language and literature including courses in grammar, composition, translation, and Francophone film and literature.

Gina M. Miele received her PhD in Romance Languages and Literatures from Harvard University. She specializes in Italian folk and fairy tales, particularly those of Luigi Capuana and Italo Calvino. She teaches courses on various periods, authors and genres of the Italian literary tradition, as well as all levels of Italian language. She has published in Italica, Marvels and Tales, Fabula, Marvelous Transformations: An Anthology of Tales and Contemporary Critical Perspectives, the Greenwood Encyclopedia of Folktales and Fairy Tales, the Harvard College Journal of Italian American History and Culture, Essays on Italian American Literature and Culture and the Paterson Literary Review. She is the co-author of the Activities Manual to accompany the Italian textbook, Parliamo Italiano! (2011, 2015).

Mazooz Tawfiq Sehwail, instructional specialist and coordinator of the Arabic program, received an MA in linguistics from New York University and is completing a PhD at The Graduate Center, CUNY. His research interests include linguistics and second language acquisition. He teaches all levels of Arabic language and specialized courses in Arabic language and Arabic studies.