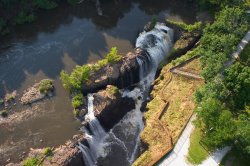 The Passaic River basin shows remarkable diversity for its moderate size, containing some of the most pristine, environmentally important lands in New Jersey (that is, the drinking water watersheds and reservoirs of the Highlands), several large exurban/suburban wetland complexes in south and eastern Morris County, as well as some of the most densely populated land in the nation with severe environmental contamination along the lower reaches of the River.

The Passaic River system’s drainage basin of covers approximately 2,400 km2 , (935 sq mi) of northern New Jersey, and Rockland and Orange counties in southern New York. The river system is characterized by a complex web of major and minor tributaries, draining much or part of eight New Jersey counties (about 10% of the state).

The Passaic River itself begins in ~80mi journey in Mendham, NJ in Morris County at an elevation of about 600 feet above sea level. Much of its headwaters watershed is preserved in Jockey Hollow National Historic Park and Great Swamp National Wildlife Refuge. Several small tributaries such as Black Brook, Great Brook, Loantaka Brook and Primrose Brook join the Passaic River as it flows south in this area before it exits the Swamp through the Millington Gorge, formed as the outlet of glacial-era Lake Passaic.

Then the River turns toward the northeast and then due north, forming borders of Somerset, Morris, Union and Essex counties. A major tributary, the Rockaway River (supplemented by the Whippany River just upstream), joins the Passaic in East Hanover in the midst of the large wetland complex of Hatfield Swamp and Troy Meadows. The Passaic continues north through another large wetland complex, Great Piece Meadows, where it turns east. Shortly thereafter, the Passaic is joined by the Pompton River in Wayne in the “Two Bridges” area. Here, near the Passaic-Pompton confluence, the  North Jersey District Water Supply Commission withdraws from both rivers and pumps it to the Wanaque Reservoir.

After the confluence with the Pompton River, the Passaic adopts a distinctly urban character for the rest of its journey. The River flows through Little Falls, losing 40 feet in elevation in short order. Behind a dam just before the falls, the Passaic Valley Water Commission withdraws water for drinking purposes and operates a water treatment plant. Also at Little Falls, the United States Geological Survey has operated a stream flow gage since the early 1900s. Five miles further, the River encounters the Great Falls in Paterson, (second highest falls east of the Rockies) where it tumbles 70 feet over a rocky ledge and immediately makes two, sharp 90+ degree turns. It continues north, reversing itself southward at Hawthorne. Several minor tributaries such as Goffle Brook, Molly Ann Brook, Deepavaal Brook and Peckman River join the Passaic in this stretch.

The next major feature is Dundee Dam and Lake in Garfield, which was constructed to provide water to riverside industries. The dam also serves as a barrier to tidal flows from Newark Bay, keeping both contaminated sediments and anadromous fishes from moving any farther upstream.

Below the dam at Wallington, the Saddle River joins the Passaic, as do the First (now underground in culverts), Second and Third Rivers.

After flowing due south for several miles, the River turns east at Harrison, makes an S-curve, then turns south and unites with the Hackensack River as it completes the journey to Newark Bay.

The 17-mile, tidally influenced reach of the Passaic between Dundee Dam and Newark Bay contains highly contaminated sediments, most notably from dioxins discharged as a by-product from the manufacture of the herbicide Agent Orange in the 1960s at the Diamond Alkali plant in the Ironbound section of Newark. Recently, a consortium of state and federal agencies has actively begun actively pursuing remediation in this area.