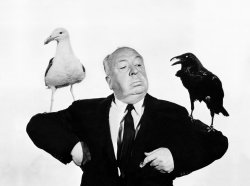 Alfred Hitchcock may have been “the Master of Suspense,” but his greatest mystery was himself.  Film critic and Hitchcock scholar Stephen Whitty reveals some of the director’s secrets in “Hitchcock’s Blondes,” a four-part series that looks at the filmmaker’s art through his greatest obsession and his four finest leading ladies: Grace Kelly, Kim Novak, Janet Leigh and Tippi Hedren. Behind-the-scenes stories and post-film discussions provide unique insights into the work.

Sundays with Hitchcock are FREE and open to the general public.

The screenings and post film discussions will be held from 2 PM – 5 PM in the School of Communication and Media’s new 197-seat Presentation Hall.

Hailed as the first of the “slasher” films, this brilliant thriller is much, much more — including a bleak, blackly comic commentary on sex, Mom and the American psyche. With Janet Leigh, Anthony Perkins.

It’s an avian uprising – but why? Hitchcock’s refusal to answer that question – or even provide a resolution – makes this the edgiest and most experimental of his films. With Tippi Hedren, Rod Taylor.

One of the director’s most purely entertaining movies is also a devastating study of voyeurism and urban anonymity (as well as a graduate-level course in film editing). With James Stewart, Grace Kelly.

More personal than perhaps its creator even knew, this spiraling mystery details a man’s urge to create the perfect, obedient object of his desire – and her own desire to break free. With James Stewart, Kim Novak.

An award-winning writer and two-time former chair of the New York Film Critics Circle, Stephen Whitty publishes in the New York Daily News, The Star-Ledger and in many other newspapers, national magazines and websites. He has his BFA from NYU’s Tisch School of the arts and has taught and lectured at NYU, Rutgers, Baruch, the Metropolitan Museum of Art, the Museum of Modern Art, the Museum of the Moving Image and the New York Public Library. A regular guest on television and radio, and a frequent juror at film festivals, Whitty’s most recent book is The Alfred Hitchcock Encyclopedia.