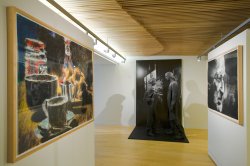 The mission of the University Art Galleries (including its flagship George Segal Gallery) is to propagate culture and art through interpretive contemporary exhibitions and related events focused on its collection and local, statewide and international inspirational sources.

The Galleries’ vision is to become a premier destination for modern and contemporary art.

The George Segal Gallery in and of itself serves as a testament to Montclair State University’s commitment to be a major center for the visual arts and share its rich array of intellectual and cultural resources with the people of New Jersey. The Gallery endeavors to foster art education and exposure to important works of art to area students as well as a wide audience of all ages from surrounding communities.

In 1962 the School of Fine and Performing Arts (which later became the College of the Arts) established its first Montclair State University Art Gallery, made possible by a generous donation of artwork by Dr. Oscar and Mrs. Rose Cosla of Romania. The Cosla Collection, featuring European paintings dating from the 16th to 19th centuries, is on display in the lobby areas of the Alexander Kasser Theater.

Over the years since its inception, the University Art Gallery strengthened its commitment to the exhibition of compelling contemporary art and in the early 1990s, the outdoor Sculpture Garden was established and opened to the public, accommodating six permanent outdoor sculptures The Galleries’ sculpture collection has since grown to include over a dozen dynamic outdoor works that have come to be sited in locations across the campus.

In 1999, a second indoor-gallery was established — Gallery One, in order to provide students, faculty, and other professional artists with an additional venue in which to exhibit their work.

The original University Art Gallery, Gallery One and Sculpture Garden spaces were eventually converted to alternative uses. However, in 2006 the University committed resources to building a new state-of-the-art gallery which would come to be named after the renowned sculptor George Segal. Thanks to the generosity of the George and Helen Segal Foundation and the university’s overall commitment to the visual arts, the George Segal Gallery has become an important destination in New Jersey and is the world’s only gallery in George Segal’s name, providing a lasting legacy to this seminal 20th-century artist. [About George Segal]

The George Segal Gallery serves as the flagship facility of the University Art Galleries, boasting more than 3,000 square feet of exhibition space and 3,300 square feet of office, classroom and storage space. In addition to housing some important works by George Segal, the gallery has become home to a growing permanent collection of modern and contemporary art, which includes works by Richard Anuszkiewitz, Alexander Calder, Andy Warhol, Clarence Holbrook Carter, Andre Masson, Mayer William Schlesinger and the Lida Hilton Print Collection.

The gallery presents a minimum of four changing, contemporary exhibitions each year that feature major American, international and regionally acclaimed artists including the works of the University’s faculty. It also features an annual exhibition of students graduating from the college’s Department of Art and Design.

The George Segal Gallery has received numerous Citation Awards from the New Jersey State Council on the Arts for its excellence in artistic programming and public service to the arts.