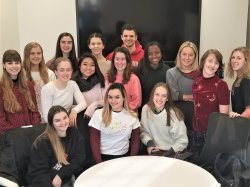 The Danceaturgy Archive: an anecdotal and scholarly reference work-in-progress at The Creative Research Center

“Dance studies has always been interdisciplinary, even if [it] has been neither sufficiently acknowledged nor fully theorized. The difficulty of traversing disciplinary divides and accommodating diverse media without losing a focus on dance is nevertheless a primary reason that ‘modernism and dance’ remains a topic in need of discussion.”
— Carrie J. Preston, Modernism and Dance, 2014.

What is a Danceaturg and What Do We Do?

We are a group of select individuals that meets weekly in the Spring semester at 8:30 am every Friday – in the Dean’s Conference Room – We convene over fruits and healthy snacks for lively conversation to conceptualize what we physicalize – and respond to provocative writing prompts on the process of dance.

A danceaturg is a reflection of the community in which he or she trains – We think from the perspective of the bird’s eye, the worm’s mouth, and roundabout oversight – not only of the Montclair State dance community – but of the ways in which we grow our cognitive functions from an artistic perspective while dancing, rehearsing, or experiencing dance as an audience member…

The Danceaturgy Archive is an annotated, catalogued, keyword-searchable hybrid text and visual record [Web-based/digital/dvd/paper documentary] of choreographic interviews, presentations and performances in The Dance Division of the Department of Theatre & Dance in The College of the Arts at Montclair State University.

Danceaturgy is an observational strategy invented at Montclair State as a variant of dramaturgy in the world of theatre (reiterated by Erving Goffman in homage to G.E. Lessing’s Hamburg Dramaturgy of 1767).  As a pedagogical process, selected dance students/writers are chosen from repertory classes to examine the works in which they are performing, and given the task to develop a critical analysis of the works by “stepping out” and looking at pieces objectively.

The danceaturg is the performer-as-spectator, in contradistinction to the theatrical dramaturg; and The Danceaturgy Workshop is offered as a credit-bearing course every spring.

The Danceaturgy Archive is an ongoing effort to make centrally-available published and unpublished on-site dance videos; dance writings; rehearsal notes; oral history in-person and telephone interviews with visiting repetiteurs and choreographers who trained and performed with the masters of modern dance; conversations with Montclair State dance faculty; Informance plans; themed repertory curatorial notes; “Talkback” and rehearsal/staging videos; and weekly email Letters from a Danceaturg by Dr. Neil Baldwin to Dance Division Director Lori Katterhenry (sent through her to Montclair State dance majors and faculty, and other interested readers around the College, the University and the world).

The Danceaturgy Archive memorializes the historic commitment by the Montclair State University Dance Division to the modern dance legacy, and to the preservation of cultural patrimony, at a complex time in our culture when the values of a liberal education are under inordinate scrutiny. The Dance Division believes that the arts are the life’s blood of that education, and is committed to inculcating in its students the necessity for a historic consciousness of an ephemeral form.

The Danceaturgy Archive offers herewith its first documentary compilation, a six-year retrospective survey of the activities of The Dance Division:

In Spring 2013, The Danceaturgy Archive produced three new documentaries in what will be an ongoing series: Bill T. Jones: Continuous Replay (by Kenneth Spooner); and Informance and Jasmin Vardimon in conversation at Kasser Theater (by Lindsey Rassmann).

As of May 2014, The Danceaturgy Archive has added the following new material to its burgeoning collections: Three Interview/Conversations by Neil Baldwin with Bill T. Jones on Spent Days Out Yonder; Wayne McGregor on Atomos and other works; and Carrie Ann Shim Sham on Stardust. A presentation by Jim May and Elizabeth McPherson on the work of Anna Sokolow. The Dance Department, Informance, and the Danthology on the repertory theme of Minding the Dance by the 2014 Danceaturgs.

[All archival videos are filmed and edited by Kenneth Spooner].

As of May 2015, The Danceaturgy Archive has added the following new video material to its collections:

Heidi Latsky on Dance for Film at Montclair State University
Watch Neil Baldwin interview Heidi Latsky on her new dance for film, Soliloquy.
A three-part conversation in Kasser Theatre: Part 1 – Part 2 – Part 3
A documentary “behind the scenes” of Soliloquy

Kathleen Kelley’s A Note for the Dancer

The Dance Division has launched its new Low-Residency MFA. Danceaturgy will be taught at the graduate level commencing Summer 2017. Danceaturgy course prospectus.

In October-November 2016, Neil Baldwin interviewed guest choreographer Larry Keigwin during the process of creating and setting his new dance, Mad Rush, on Montclair State University students. The Biography of a Dance was conducted in three sessions:

On the occasion of the American premiere of her new dance, Figure a Sea, presented by PEAK Performances at the Montclair State University Kasser Theatre in October 2016, choreographer Deborah Hay sat down with Neil Baldwin for this wide-ranging interview:

On Dance Day, April 7, 2017, the Danceaturgs introduced the Dance Works repertory and answered questions from the audience:

During the spring 2017 semester, the members of the Danceaturgy Workshop Seminar compiled a dictionary of dance terms in their own words.

In October 2017, Neil Baldwin interviewed distinguished visiting choreographer Pam Tanowitz about her new work in collaboration with pianist Simone Dinnerstein based upon the Goldberg Variations by J.S.Bach.

On April 6, 2018, the Sophomore Danceaturgs presented the DanceWorks/Dance Day pre-show

Read the Future Prompts for 2018

Nine Montclair State dancers, under the rehearsal direction of Kathleen Kelley, prepared To Seldom Spire by Sara Hook for the Fall 2018 Works-a-Foot concert.

Read Waverley’s proposal and fascinating project journal and watch the “final” below!

After the Dance Collage shows on March 28th and 29th, 2019, the Danceaturgs interviewed the extraordinary student choreographers about their works and processes.

The Martha Graham Dance Company celebrates the 75th anniversary of Martha Graham and Aaron Copland’s classic Appalachian Spring and the premiere of a new work by Augusta Read Thomas and Troy Schumacher, The Auditions, November 14-17, 2019 at Alexander Kasser Theater.

For the November 15, 2019, “Sneak Peek” at Kasser Theatre, Janet Eilber, Artistic Director of The Martha Graham Company, sat down for a conversation with CRC Director Neil Baldwin about the 75th anniversary of Graham’s classic Appalachian Spring and the premiere of The Auditions by Augusta Read Thomas and Troy Schumacher

Rebecca Seow, a New York Native, is a Junior at Montclair State University pursuing her BFA in Dance Performance, and a second-year Danceaturg. Prior to MSU, she trained at the New York Theatre with Diana Byer and Christina Paolucci; and Frank Sinatra School of the Arts with Ani Udovicki and Olivier Heuts. She has performed in works by Ohad Naharin, Jessica Lang, Liza Gennaro, Tyler Gilstrap, Fredrick Earl Mosley, Mark Harootian, James Sutton, Keith Michael and many others.

For her Choreography III class with Maxine Steinman in the spring 2020 semester, Becky was given a project to choose a choreographer and conduct an interview with him or her. Becky knew she wanted to try to contact Pam Tanowitz, whose works such as “Double Andante” and “Short Memory” she had known for some years. She recalls that she “could see the weightedness of modern even though the Tanowitz Company dancers were wearing pointe shoes.”

Becky had been exposed to the work of Merce Cunningham while still in elementary school; and she continued to seek the same feeling, finding it apparent in Pam Tanowitz’s work.  For the interview appointment, Becky reached out via Instagram to Melissa Toogood, assistant to Ms. Tanowitz, and a principal dancer with her. The conversation was confirmed for 2:30 p.m. on February 7th, 2020. “It was an amazing experience to be able to talk to a choreographer who I always have and still do admire,” says Becky.

Listen to the interview now:

On Sunday afternoon, March 1, 2020, Neil Baldwin conducted a talkback after NEW MOVES: LIMON in the 21st Century, a concert at the Martha Graham Studio in NYC curated by Maxine Steinman. The discussion began with the question, “How do you feel Jose Limon in your body?” Here are the eloquent answers by performers Jennifer Chin, Kathryn Alter, Maxine Steinman, Columbine Macher, Ryoko Kudo, Jose Baez, Tashae Udo, Mark Willis, and Daniel Fetecua.

The Spring Danceaturgy Seminar was prompted via ZOOM on Friday, April 17, 2020 to compose a response to the following: “I dance — now — because…”

IMAGINING THE FUTURE OF DANCEATURGY

The Spring 2020 Danceaturgs express their individual and collective visions and intentions for their discipline, conceived at Montclair State University in 2007. Read their words.