Under the guidance of Dr. María José García Vizcaíno, Associate Professor, the students produced a specially adapted script of the play El coronel no tiene quien le escriba (No One Writes to the Colonel) by Nobel-Prize-winning author Gabriel Garcia Marquez. Vanessa Carrillo served as the voiceover. In May it was performed to a sold-out audience which included visually impaired members of the Hispanic community in New Jersey and New York at the Repertorio Español, in New York City.

Through audiodescription, the audience members are able to listen through an earphone and special receiver to a narration that describes the performance’s relevant visual elements without intruding on the performers’ dialogue.

Dr. Maria José García Vizcaíno, Associate Professor, Spanish and Latino Studies, accepted the award on behalf of her students, noting “It was a very exciting project. . . . My students and my class were amazing. They did everything. They did the script and the voiceover. They did the community outreach. . . . The reviews and feedback were very, very positive from the audience. We would like to hopefully repeat the experience.”

The organization’s Achievement Awards salute “outstanding contributions to the establishment and/or continued development of significant audiodescription programs in each of three areas: media, performing arts and museums,” according to their guidelines.

Below on left and above- Dr. Maria José García Vizcaíno receives award from Chris Gray, Audiodescription Project Chair, American Council of the Blind; on right, Dr. García Vizcaíno pictured with the other recipients. 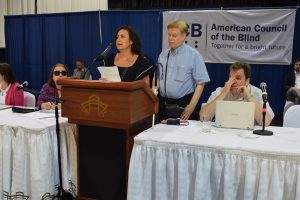 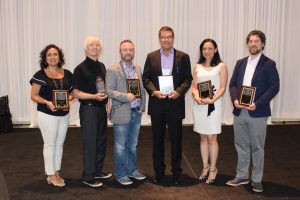