On November 6, 2019, the Spanish and Latino Studies Department and CHSS Career Development collaborated to host Career Night for the second time. The department was quite generous in even offering a door prize, which was a large basket of school supplies. Seven professionals from different fields were invited to speak about their jobs in a panel and interact with the students. Some of the featured guests were: a speech-language pathologist, a bilingual investigator, a Spanish/English interpreter, a CEO of a Spanish news magazine and a supervisor of interpreting services in the Superior Court of NJ. The speakers emphasized the relevance and importance that a Spanish degree holds in their careers, and provided crucial advice about their respective careers. Afterwards, the students were able to speak personally with the professionals, learn more details about their jobs and even do some networking. About 50 students attended who were greatly benefited by this special event. It was supposed to be only 2 hours long, but the professionals and students stayed speaking with each other for almost an extra hour!

One student commented: “Career Night is very useful for people who don’t know what they will do after they graduate. It’s a really good way to learn about different career opportunities, and even to do some networking for internships or future jobs. It gave me hope that there is a positive future for my degree choice, which is Spanish.”

Another observed: “It was amazing to hear about so many different things you can do with a Spanish degree and the Certificate in Spanish Translation! It was fascinating to hear the professionals share about their different jobs and experiences. I learned that a Spanish Major or Minor is necessary, can open many doors, and is more important than I had previously believed. This encourages me to study harder and do well with my Spanish minor.”

We hope that this event will continue to be held every year, and that more professionals would be invited to speak to and with the students at Montclair State in the future. 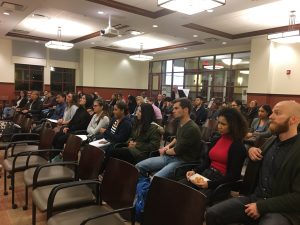 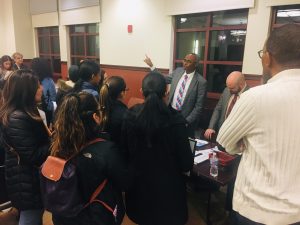