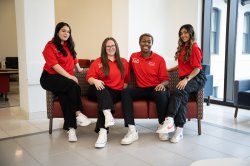 Richard is a junior at Montclair State University, majoring in geography urban and environmental studies, with a minor in political science. He has passions for environmental sustainability and research, as well as public policy. After being a part of the SGA first as a legislator then as the acting Attorney General he has devoted his term to bringing student service on campus, destigmatizing mental health, aiding students with food insecurities, student safety, and revamping student activities and programming, post covid. During his time at MSU Richard has also been involved holding positions in different organization and departments like the treasurer of Phi Delta Theta fraternity, vice president of the honors program advisory board, greek unity task force member , LSAMP program researcher, and carried jobs in the Center for Student Involvement as a office and event assistant and Undergraduate Admissions as an admissions ambassador. Richard is very excited to be taking on this role as a student leader and looks forward to the positive change that he aims to make on campus to better student life.

“Life’s most persistent and urgent question is, ‘What are you doing for others?’”

Kate Mora she/her is the Executive Vice President of the Student Government Association of Montclair State University. She is a senior majoring in Jurisprudence law and society. She transferred here her junior year from her local community college where she was heavily involved in social justice organizations. She was the treasurer for the Juvenile Justice Reform Club and the sole student representative for the Campus Diversity Task force. She aims on using her experience to try to make everyone have a voice on campus and feel welcomed.

Camryn S. Wade is the Executive Treasurer of the Student Government Association. She is a senior at Montclair State University majoring in Business Administration with a concentration in management. Her involvement in SGA first started as being a legislator, and since then she has held the roles of Director of Outreach, Chief of Staff, and now Treasurer. On campus she is involved in Greek Life, The Montclarion, CSI, Team Rocky, OSJD, and Undergraduate Admissions. Her goals for this year are to help create better financial resources for our organizations, as well as the Executive Branch. She hopes to use her student involvement experience to bring new ideas to the role, and make sure all students feel heard and represented on our campus.

Krisha is a junior and presidential scholar at Montclair State University, studying Exercise Science with a concentration in pre-clinical professions. She is from Woodland Park NJ, and strives to take on leadership opportunities to help others excel and succeed. She joined SGA her sophomore year being a part of the programming board SLAM, as an on-campus events coordinator. As well as having a new role in SGA, Krisha is on the officer board for her sorority, Sigma Sigma Sigma, a Building Manager at the Student Recreation Center, and was a mentor her freshman year. She is passionate for the roles she holds on campus, and encourages others to take on leadership opportunities. As she takes on the role of the Executive Secretary, she is endeavoring to boost the social network for the SGA to engage as many students as possible. Krisha is beyond excited to be a voice for the students and wants to help all students make the best of memories throughout their college experience!