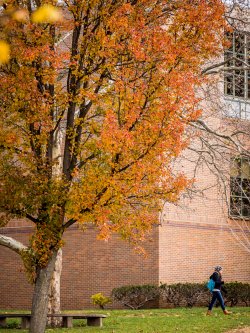 A new study conducted by Montclair State University faculty members Tarika Daftary-Kapur and Tina Zottoli has found a recidivism rate (defined as reconviction for any offense) of just 1.14% among people who were sentenced as juveniles in Philadelphia to life without the possibility of parole and then subsequently released.

The team’s findings in the study, titled, “Resentencing of Juvenile Lifers: The Philadelphia Experience,” are consistent with a growing body of scientific research that shows people age out of criminal behaviors, that lengthy sentences fail to deter crime, and that lengthy prison terms both divert funds from public health and safety initiatives, and are counterproductive to strengthening families and communities.

“Our work brings into question the commonly held belief that those incarcerated for violent offenses will reoffend. Here we have a group of individuals, all convicted of murder, with an approximately 1% reconviction rate,” says Daftary-Kapur, the lead study author and an associate professor of Justice Studies at Montclair State.

“We hope these findings will help inform discussions around early release of individuals serving long sentences, especially in the current climate,” says Zottoli.

The team analyzed data and outcomes associated with 269 juvenile lifers from Philadelphia, including 174 who were released. The 174 juvenile lifters who were released through the time of the study will yield $9.5 million in correctional cost savings over the first decade, based on marginal costs of incarceration alone. It costs roughly $50,000 per year to incarcerate people in prisons and jails, but those savings will only be realized by shrinking the footprint of incarceration, including closing additional jails and prisons.

The study also has ramifications beyond Pennsylvania and other highly incarcerated states that have large aging inmate populations that are especially vulnerable during the COVID-19 pandemic. More than 160,000 people are serving life sentences across the United States, and another 45,000 are serving sentences longer than 50 years, or virtual life sentences. A 50-year sentence for a 16-year-old could cost the state of Pennsylvania, for example, approximately $2.5 million. This study suggests that all states must consider early release opportunities for those serving de facto death sentences.

“Overall, the key takeaway from our work is that releasing individuals, specifically those individuals who have served long sentences and are most often older than 40-50 years old, does not seem to have a negative impact on public safety,” says Daftary-Kapur.