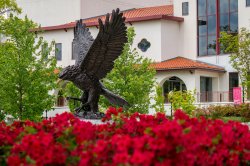 The Humanities concentration is built upon the existing state-approved B.A. in Humanities and emphasizes obsolescence-proof cognitive skills transferable to a wide range of career paths. Humanities concentrators acquire habits of analytical and critical thought, practice techniques of interpretation, gain intercultural awareness, and learn to approach cultural contexts comparatively. Graduates of this concentration have expertise in knowledge management, which encompasses the ability to analyze, evaluate, and synthesize information from a broad spectrum of sources, construct logical arguments supported by evidence, and articulate ideas clearly in oral and written formats. Humanities graduates pursue careers in many areas, including business, communications, health care, law, social work, and education. Many will transition directly from our program into the work force, but some pursue further education and earn professional credentials or graduate degrees in a variety of Humanities and social science disciplines.

Concentration in Education Studies      24 Credits
This concentration provides an in-depth exposure and engagement with education as a social, cultural, and political human endeavor, that historically has served to induct the young into the larger social and economic fabric of nations. Furthermore, this concentration through its coursework provides insights and understandings about education as a life-long engagement for human improvement, hence transcending the younger years into different stages of life.

This concentration fosters an environment for developing, nurturing, and growing relationships with the content of study including social, academic, spiritual, personal, and/or emotional dimensions. The primary function of these relationships is to enable growth, development, and learning.

An array of foundational courses provide different disciplinary perspectives, where students not only learn about education and schooling but also learn how disciplines construct the knowledge base for practitioners, researchers, and policymakers. In addition, coursework in this concentration offers opportunities to learn about human development, social systems, families, and communities.

In addition to learning about education and human improvement as a liberal art, Educational Studies will enable graduates to apply for the Masters of Arts in Teaching at Montclair State University. Hence, Educational Studies focuses on developing well-rounded, creative, and inquiry-oriented educators who have broad subject matter knowledge of topics taught in elementary schools, and who are committed to the betterment of children, communities, and society. The need for such learning experiences responds to the concept that teachers are intellectuals who know their students, who know the context of the communities, and who have a broad understanding of the subject matter they will teach.

* These two courses are required prerequisites for any student interested in pursuing the Masters of Art in Teaching (MAT) leading to a K-6 certification at MSU after completing the BA degree.

In addition to the two courses, students interested in applying for an MAT program are advised to take the following in their BA studies: