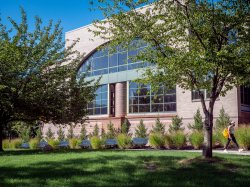 On Wednesday, November 10 @ 11:30 AM in Richardson 201, Steven Gimbel will be giving a lecture on Albert Einstein’s Letter to Roosevelt which helped spur the Manhattan Project (in-person and on zoom). Albert Einstein was one of the world’s most famous physicists but also a well-known pacifist. These two aspects came into conflict when Einstein’s colleague Leo Szilard realized how to create a nuclear reaction that could be weaponized. It was during World War II and if Szilard could figure it out, then German scientists might as well. The possibility of Hitler having atomic weapons was frightening. As a result, Szilard and Einstein wrote one of the most important letters in history to President Roosevelt that launched the atomic age. It was a decision Einstein would later regret. Steven Gimbel will examine Einstein’s pacifism, how his science contributed to the development of the bomb, why he was excluded from the Manhattan Project, and his anti-proliferation work later in life.

or attend via Zoom:

For more information on the program series go to https://www.montclair.edu/csam/nj-and-the-birth-of-the-atomic-age