Our Programs
Faculty and Staff
About Us

The Faculty of the Dept. of World Languages and Cultures unequivocally condemn any attack on civilians and aggression against other nations by those in Europe, the Middle East, Africa, Asia, the Americas and everywhere else. The current Russian invasion of Ukraine is a direct violation of international law (U.N. Charter Article 2(4)) and Russia’s own signed commitment “to respect the independence and sovereignty of Ukraine’s existing borders” (Budapest Memorandum on Security Assurances). Our hearts are with the people of Ukraine. We stand in solidarity with them in opposing this war.

Why study a World Language and Culture at MSU?
Knowing another language opens up a WORLD of job opportunities, a WORLD of travel opportunities, and offers real advantages in the MULTI-CULTURAL WORLD of the humanities, the arts, government, and the sciences.  Knowing another language allows for a greater understanding of cultural diversity and allows for better communication skills and social interaction.  Students interact with their peers in a language class more than in other classes and learn about others precisely because they consistently engage in “small talk” in the language to achieve mastery.  Students find friends in language classes which serve as a better welcome/retention tool than any other.

Why study a World Language EARLIER rather than later? 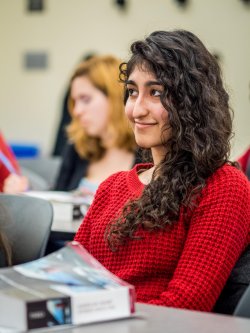 We offer a diverse range of programs spanning nine languages. In addition to language study, students focus on the literature, cinema, music and other cultural aspects of the countries in which these languages are spoken. Students can major or minor, or even double major or minor, in our diverse areas of study.

A language degree is incredibly versatile. Our students have landed spots in top graduate programs, with some going on to pursue careers in academia, international relations and government. They’ve also found success in a wide variety of fields such as business, civil service, translation, interpreting and public relations, among others.

Careers in World Languages and Cultures 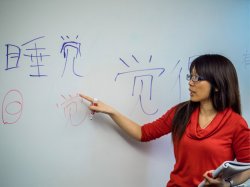 The Department of World Languages and Cultures offers nine languages. Faculty are specialized in all aspects of the cultures associated with these languages. Their expertise extends from language pedagogy to history, literature, the visual arts and translation.