We understand the urgency of your needs and will try to respond to you at the earliest possible. 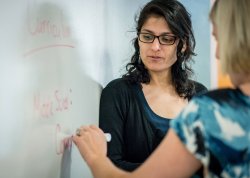 Mission of the Mathematics Department

The Department of Mathematics at Montclair State University is committed to supporting all learners in appreciating the power, roles, relevance, and beauty of mathematics within a dynamic, collaborative, and personalized environment. Through our undergraduate and graduate programs, we encourage students to think critically and creatively, pose and pursue purposeful questions, and approach problems from multiple perspectives. Our department embraces and advances mathematical connections among the sciences, arts, humanities, and in the business world, and creates opportunities for students to explore and pursue their interests at the intersections of these disciplines. In addition to preparing students for graduate studies, we also support them as they become more informed citizens and prepare them for a variety of careers including teaching and other jobs that meet their aspirations and the needs of an ever-changing society. 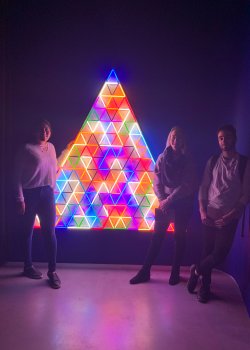 Career opportunities are unlimited and rewarding for mathematics majors. According to the US Bureau of Labor Statistics, between 2018 and 2028, the job market for mathematicians is expected to grow by an impressive 30 percent! Students that earn math degrees secure some of the highest-paying jobs. The same bureau reports that in 2018 the median annual wage for mathematicians was $101,900.

Careers in mathematics are diverse. Thanks to the growing importance placed on technology, big data, and STEM education, mathematicians and math educators are in demand across all kinds of industries. Study math or math education and you’ll have access to career opportunities you may have never even imagined, such as: 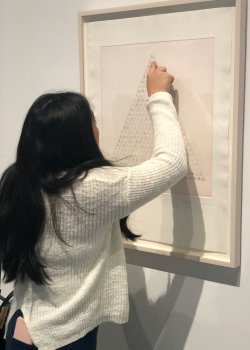 To live in a mathematically-driven world and not understand mathematics is like walking through an art museum with your eyes closed. Learning and appreciating mathematics can help us appreciate things that we might not otherwise notice about the world.

Such problem-solving is more applicable to our lives than one might think. Studying mathematics is not just about solving textbook tasks; it is about sharpening one’s skills to frame problems that exist in real life, identifying the knowns and unknowns, refining one’s strategies, and making progress toward a solution. It is through this process that we can begin to make sense about the world in which we live.

Famous People that Majored in Math

Sergey Brin – Sergey Brin is the co-founder of Google and the president of its parent company, Alphabet. Brin double majored in mathematics and computer science at the University of Maryland at College Park. The name “Google” is inspired by the mathematical term “googol,” which means ten raised to the power of a hundred.

Katherine Johnson – Recently portrayed on the big screen, Katherine Johnson was the main character of the critically-acclaimed film Hidden Figures. Her contributions in NASA were critical to the United States’ success in putting astronaut John Glenn into orbit in 1962. During her 35-year career, she held a reputation for being a master of complex manual calculations. She was awarded the Presidential Medal of Freedom by President Barack Obama in 2015.

Mae Carol Jemison – As a mathematician and astronaut, Mae Carol Jemison became the first African American woman to visit space when she went into orbit aboard NASA’s Space Shuttle Endeavour in 1992. She is involved in several initiatives such as “Science Matters” which aims to encourage young children to understand and pursue careers in STEM.

“MEET a Mathematician!” is a collection of video interviews with mathematicians from all over the world. The mission of this service is to introduce students from underrepresented groups to role models in the mathematics field. Visit the Meet a Mathematician website to access the video series of interviews. 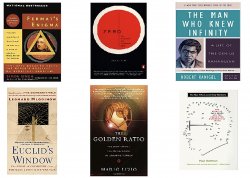 Favorite Books of the Mathematics Department 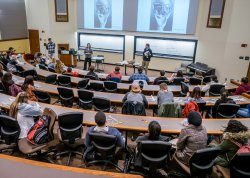 Creating a mathematician’s mentality through an array of courses, a department advisor helping you stay on track as you progress, and the Mathematics Support Center when you need some extra help.

Faculty in the Mathematics Department are involved in a broad range of research in the areas of pure mathematics and math education. Research opportunities are available for graduates and undergraduates.

Learn About Research in the Mathematics Department