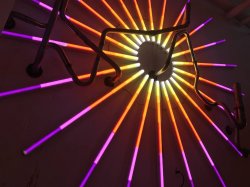 This year, Sewing Angels expanded to reach a new demographic: the Latino Community. Director Michelle Malek and Merill Silver brought Gabriela Suriel onto the team. Gabriela is a 23-year young Psychology and Fashion Design Student from Montclair State University. She also is bilingual, which allowed her to recruit five strong women who had traded their dreams for the American Dream.

The first class commenced May 9th with an introduction to sewing. The women learned to thread the machine and also how to sew straight lines onto fabric. All instruction for this class was in Spanish–a historical moment for Sewing Angels. The class consisted of a series of small projects to help to build up the women’s skillset. The women made a small tote bag, a zippered pouch, and a skirt. As the sessions progressed, the women learned the basics of patternmaking. They all worked together to measure one another. They learned the methods to transfer their measurements onto paper to then sew their very own made-to-measure skirts.

This class would not have been the success that it was if it hadn’t been for the dedication of its students. Childcare being one issue, it was a regular occurrence for the students’ children to attend the classes as well, so that their mothers could learn to sew. The level of commitment was inspirational. The pressures of working nine-to-five jobs did not interfere with attending these classes. One student in particular, Dilia Martinez, started the class already knowing the basics of sewing. While occasionally arriving to class late, her growth was evident: she surprised the team on the last day of class by gracefully striding in wearing a skirt that she had designed and made herself.

Joy and genuine smiles filled the atmosphere on that final day. It was clear that Sewing Angels inspired these women to continue to learn, and develop their newfound passion of sewing. One of the students, Yasmin Mejia, was asked what will she do with what she learned, with a smile on her face she said that she will use it to make dresses for herself and would love to come back to learn more.

The women will receive their certifications via mail as a reminder of their accomplishment. As for Sewing Angels, it will continue to spread its wings to reach more lives through the art of sewing.