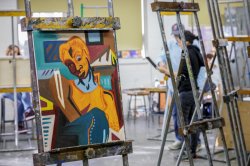 Bill Plympton is considered the King of Indie Animation, and is the first person to hand draw an entire animated feature film. Bill moved to New York City in 1968 and began his career creating cartoons for publications such as New York Times, National Lampoon, Playboy and Screw. In 1987, he was nominated for an Oscar® for his animated short Your Face. In 2005, Bill received another Oscar® nomination, this time for his short Guard Dog. Push Comes to Shove won the prestigious Cannes 1991 Palme d’Or; and in 2001, another short film, Eat, won the Grand Prize for Short Films in Cannes Critics’ Week. After producing many shorts that appeared on MTV and Spike and Mike’s, he turned his talent to feature films. Since 1991, he’s made twelve feature films. Eight of them, The Tune, Mondo Plympton, I Married A Strange Person, Mutant Aliens, Hair High, Idiots and Angels, Cheatin’, and Revengeance are all animated features. Bill Plympton has also collaborated with Madonna, Kanye West and Weird Al Yankovic in a number of music videos and book projects. In 2006, he received the Winsor McCay Lifetime Achievement Award from The Annie Awards.

Motivation of the Artist/Designer

What is the Artist Trying to Communicate to the Viewer?

David Antonio Cruz is an interdisciplinary, New York-based artist. Cruz fuses painting, video, and performance to explore the invisibility and silencing of brown and black queer bodies. Born in Philadelphia, Cruz received a BFA in painting at Pratt Institute (1998) and an MFA from Yale University (2009). He attended Skowhegan School of Painting and Sculpture and completed the AIM Program at the Bronx Museum in 2006. Recent residencies include the LMCC Workspace and Project For Empty Space’s Social Impact Residency. Notable group exhibitions include El Museo del Barrio, BRIC, Performa 13, and the Smithsonian National Portrait Gallery.  He was awarded fellowships with The Franklin Furnace Fund Award and The Urban Artist Initiative Award. Recently he produced and performed How to Order A Chocolate Cake at BRIC and on The High Line Park and his operatic performance, Green,howiwantyougreen at The Whim Plantation and Estate in St Croix and the Conservatory of Music of Puerto Rico in San Juan. Recent press includes The New York Times, Wall Street Journal, WhiteHot Magazine, W Magazine, Bomb Magazine, and El Centro Journal. Currently, he is participating in the Queer Arts Mentorship/ Fellowship Program. The artist lives and works in New York City. Cruz will discuss the nuances of genderqueerness, race, in public and private spaces, and the invisibility of the brown/black body through the use of portraiture and opera-like performances.

Jacob Olmedo is a designer and artist who focuses on sustainability and the future of fashion through textiles and garments. He was awarded the Future Textiles Award in 2017 and the Role Models Competition for his work integrating fashion and plant life. Jacob practices in-depth research, experimental material development, user testing, and garment construction. All as a part of his continuing design work And The World Will Be As One. And The World Will Be As One showcases an array of important relationships we as humans have with our clothing and our natural world.

Gaming the System: The Political Potential of Play.

Cards Against Humanity. Minecraft, Stardew Valley. Tennis. What do they have in common? You’ll have to come to this talk to find out! A hint though, is that they are all political in some way or another. I’ll talk about how these popular games send political messages, and will share some of what I have learned in my own work in games for social change—most importantly, how to make them fun.

Colleen Macklin is a game designer, a Professor in the school of Art, Media and Technology at Parsons School of Design and founder and co-director of PETLab (Prototyping Education and Technology Lab), a lab that develops games for experimental learning and social engagement. PETLab projects include disaster preparedness games and sports with the Red Cross, the urban activist game Re:Activism and the physical/fiscal sport Budgetball. PETLab has also designed game design curricula for the Boys and Girls Club and administers a design fellowship in reproductive justice with the Ms. Foundation. She is a member of the game design collective Local No. 12, best known for their social card game, The Metagame. She was a Director’s Fellow at the MIT Media Lab, where she collaborated on a series of games with students and faculty, including Microcultures, a social card game about the human microbiome. Her work has been shown at Come Out and Play, The Whitney Museum for American Art and Creative Time. She is co-author of the book Games, Design and Play: A detailed look at iterative game design and the online interview series “Iterate: Perspectives on Design and Failure” (http://www.designandfailure.com/)

Russak began his career as an Industrial Designer and over the years developed a niche for himself within Design Strategy and Innovation.  He has created and led corporate design innovation groups, a tech startup and many years of design operations leadership with design firms. More recently, with Accenture, he was firmly assigned to an innovation team through an acquisition selling design thinking pitching digitally connected lifestyle and commerce ecosystems to existing Accenture businesses.  His charge was to look at industries and “unpack” the opportunities for a front-end design innovation service to identify new forms of revenue for Fortune 100 firms. All through design thinking, journey mapping, and stakeholder focus.  One thing Russak speaks about with passion is how the design innovation ethos is witnessing a renaissance in business like never before seen.  Designers are once again in demand in ways that firms are again only beginning to understand.  Just look at all the new design firm acquisitions by the likes of McKinsey and Accenture.  It’s a chaotic world of opportunity out there.

Peter Morin is a Tahltan Nation artist, curator, and writer. In his artistic practice and curatorial work, Morin’s practice-based research investigates the impact zones from when indigenous cultural-based practices and western settler colonialism collide. Please join us for a special performance based piece by the artist.

Song performance as a map to the land. a tape of grandma Eva Carlick performing Tahltan Nations songs. song performance across the country. Old Man Kulah Hung’s song. consider that indigenous language is a GPS. a map to your land. consider the language as a sonic structure that allows you to perform Indigenous cosmology. the song allows us an opportunity to name the complicated realities of Indigenous knowledge. Grandma Eva was one of the best singers of Tahltan songs, along with an important practitioner of Tahltan performance art. on a recent driving trip to the Tahltan territory, Old Man Kulah Hung’s song, sung by Grandma Eva, while driving through the exact part of the territory that inspired its creation. On the tape, the Grandma Eva’s voice introduces the song before she sings. she has a performative language. she says, ‘he dreamed this song from dead people… people going down to that valley. a bunch of people. that Tahltian. that’s hows he dream. bunch of people. they sing this song. and that man go a head. this moment and this song, plus the articulation of its creation, brings my Tahltan body back into the landscape.

Seph Rodney was born in Jamaica and grew up in New York City. He has an English degree from LIU, Brooklyn, a studio art MFA from the University of California, Irvine, and a PhD in museum studies from Birkbeck College, University of London. He is an editor for the Hyperallergic blog, writing about contemporary art and related issues. He has written for the CNN Op-ed pages, Contemporary And, American Craft, and for Artillery Magazine. He is a current adjunct faculty member at Parsons School of Design. He is currently under contract with Routledge press to produce a book based on his ongoing research regarding the personalization of the museum visit. Rodney will discuss his approach to writing about art and culture, of doing what he calls “particularized” or “embodied” writing in two senses of the terms. The first is the sense of both recognizing and conveying in his writing that he is a particular person with a personal history that inflects how he sees what he sees and how he describes what he sees. The second is how the observation takes places in (and over) time and space, from a certain embodied position.

Arda Yalkin is 43 years old. If we don’t count his archeology education which he left he didn’t receive any art education. He learned everything by himself and had his first exhibition at the age of 37. Today he is one of the best known digital artists of Turkey. His work has been exhibited in France, Italy, USA, Russia, Spain and Greece until now. He has been featured in art events such as Loop Barcelona, Moving Image New York, Paris Fiac, Art Athena and Contemporary Istanbul. In his presentation Yalkin will talk about his self-learning process, his works which he creates by using many disciplines such as photography, video, 3D modelling, visual effect design and animation.

Matej Knezevic is a Croatia-based visual artist preoccupied with issues surrounding his personal environment, drawing on installation, video, graphic design and painting. In addition to his artistic practice, Knezevic is engaged in the work of several cultural non-profit organizations alongside his daily practice as medical doctor and urology specialist.