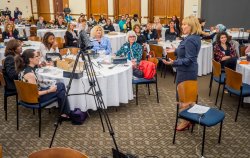 Women Entrepreneurship Week began as an idea in a cubicle at Montclair State in spring 2014. The first WEW events were held in 2014, when four north Jersey universities participated. By October 2017, WEW had grown into an international, national and statewide celebration. This section provides info about the WEW events held in 2018, 2017, 2016, 2015 and 2014 at Montclair State and elsewhere.