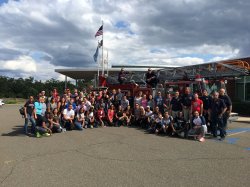 The Office of Fire Safety is responsible for all aspects of life safety throughout the University. Preventive activities include fire prevention training for University personnel, conducting fire and evacuation drills, testing of fire detection and protection equipment, providing educational programs, evaluating materials, and establishing guidelines for fire-safe materials.

In each residence hall, there are several life safety systems in place to make sure our students are as safe as they can be. Please review the following list and note the importance of each system.

We look forward to working with you throughout your college experience here at Montclair State University. Sprinkler systems suppress fires and keep them from spreading. According to the Center for Campus Fire Safety, “Automatic fire sprinklers are one of the most effective methods of controlling a fire and protecting the occupants of the building from the smoke and fire.”

Overall, the above preventative measures help save lives. However, maintaining a safe campus requires the cooperation of the entire University community; therefore, the University has established strict fire safety guidelines that all members of the campus community must follow.

In the event of a fire alarm, do the following things:

In the event of a fire, do the following things:

Assist any person in immediate danger to safety, if it can be accomplished without risk to yourself.

Immediately activate the building fire alarm system. This will sound the fire alarm bells or horns to evacuate the building and will automatically notify the Campus Police and Local Fire Departments. It is best to have these agencies respond and not be needed than it is to have them arrive too late for a potential rescue.

If the fire is small enough, use a nearby fire extinguisher to control and extinguish the fire. Don’t fight the fire if these conditions exist:

When they hear the fire alarm sound, all personnel in the affected areas shall evacuate the building immediately.
Upon evacuating the building, personnel shall proceed to the designated meeting area (at least 150 feet from the affected building) where the supervisors are responsible for taking a head count and accounting for all personnel.

NO personnel will be allowed to re-enter the building without permission of Montclair State University Campus Police or the Local Fire Department.

All large fires will be investigated by NJ State Fire Marshal

Items Not Permitted in Residence Rooms

Smoking and/or vaping in residence halls is expressly prohibited at all times.

Any and all electrical equipment brought into the residence halls by a resident must bear the Underwriters Laboratories (UL) seal of approval and must be used for the purpose for which it was designed. Items found not meeting these standards, or in violation of any other fire safety regulations, will be confiscated and returned at the end of the semester/academic year.

Please note that this compilation is not an exhaustive list of the violations for which you may be cited.  For additional information, please visit the Office of Residence Life.

Smoke and heat detectors are installed in every residential room. Whenever there is a dangerous presence of smoke or heat, the detectors send a signal to the fire alarm control panel which activates the fire alarm. This life safety system lets students know when to evacuate their room/building and ensures that they are quickly relocated to a safe area. The local fire departments (Montclair, Little Falls, and Clifton) respond to all fire alarms.

Sprinklers are an important part of the fire protection system in all University residence halls and many other campus buildings. All older residence halls have now been retrofitted with up-to-date fire alarms and sprinkler systems. Like fire alarms, these systems are checked on a regular basis. Their purpose is to suppress a fire and keep it from spreading. Water flowing in the system triggers the fire alarm. Please report any leaking sprinkler equipment to the Director of Fire Safety at 973-655-5401.

A popular activity in some buildings, “hall sports” (throwing objects like balls and Frisbees in hallways) can damage fire sprinkler system equipment. Designed to be sensitive to rising temperatures, sprinkler heads can be easily damaged when they are bumped. Likewise, hanging any objects or decorations from sprinkler heads and pipes can also cause damage.

Water from a sprinkler can leave oily stains on carpet and other furnishings. All repair costs due to negligence are charged to the department that sustained the damage. Residential Life is charged with any damage in residence halls–and will attempt to bill the person responsible in order to keep down costs.

Please Note: Failure to comply with the guidelines below will result in disciplinary action, which may entail removal from the residence halls.

Hi everyone. I’m writing to tell you what happened at my dorm since some of you want to know the story.

It was 4:30 a.m. and I was about to go to sleep. My roommate Becky was already sleeping. The fire alarm went off so I tried to wake her up, although we never go out for them because we have so many fake ones. I had a feeling about this one because it was out of the blue. Also, we had a floor meeting a few days before and my RA said that they are gonna check every room to make sure everyone goes out. I had to fight with Becky to go outside. She said that she was gonna hide in the closet. Eventually, she got up, went to the bathroom and changed her clothes. When she was in the bathroom she looked outside to see if there were any people outside and she said that there weren’t so she wasn’t going. So I played mommy making sure that she had her coat, gloves, shoes and of course. cigarettes. Then I went to my friends’ room across the hall and banged on their door, thinking they were already outside because I knew they were awake. Right before I was about to go outside, they opened the door. They were pretending to be sleeping. Then I told them off and told them to hurry up because it was real. Then I went to the next door and did the same thing.

When we were in the hallway of my floor about to go downstairs, we started to see a lot of gray smoke. I thought it was just someone stupid who lit a smoke bomb. Then we walked down the stairs to the third floor (I live on the 4th) and it was all black, I was in shock. Just standing there, looking at it and breathing it in. That’s when Becky became my mommy. She yelled at me to cover my face and keep walking. The smoke was so heavy that I became light-headed. I couldn’t imagine actually being where the fire was, I probably would have passed out.

Finally, we got outside and walked around the front of the building. That’s when it was the most scary. There were a few girls hanging out of their window screaming for help with a huge cloud of black smoke behind them. Becky said “Let’s get out of here, whatever we see is gonna be bad”. There weren’t any fire trucks here yet so we didn’t know how long they would last. Finally one came and a huge crowd of people jumped in front of it pointing at the girls. They were gonna go to the other side of the building and they yelled for anyone to help and a bunch of guys ran to assist them. Eventually they go the girls out. Then we just stood outside for hours in the cold worrying if everyone was ok. While standing there we talked to a kid who jumped out of a third floor window. He was limping and his clothes were all ripped. Also kids who got out early enough ran across the street to some man’s house and woke him up and he brought over a ladder which saved dozens of kids.

I was home for a week wearing only the clothes on my back. I had no money, no license, no make-up, nothing. I went home wearing slippers. Ironically I had to bring everything to school because we are moving out of my house. Everything I owned was at school.

Now I just got back to school and things are very different. A lot of people moved out and the 3rd, 4th, and 5th floors north are in a hotel. It’s not ever gonna be the same. Luckily, none of my things are ruined. I actually think they cleaned up our room a little bit. I had beer in the room and it ended up hidden behind my bed and the window fan was out.

I just wanted to let you know to take the fire alarms seriously!!! Even if it is just a drill, on the news I heard about another alarm in another dorm on campus going off and some girl from Seton Hall said that the fire alarm went off and she looked out the window, saw no fire trucks so she went back to bed. Obviously, some people haven’t learned even when a real fire killed some people on her campus.

Thank you all for being so concerned. It means a lot. Feel free to forward this if anyone asks.