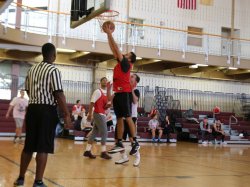 Every person who participates in Intramural Sports is responsible for knowing, understanding, and abiding by all the information on this page.

All participants must be at least 18 years of age or older. The following persons are the ONLY people eligible to participate in the Intramural Sports Program:

NCAA Athletes: An individual MAY NOT PARTICIPATE in their specialty or equivalent sports during the same academic year in which they participated with the varsity team. Any student practicing with a team during the year is not eligible to participate in that intramural sport or that sport’s equivalent.

MSU Sport Club Members: Sport Club members are eligible for participation in their equivalent sport, but are limited to two members per intramural sport team.

Professional Athletes: Any individuals who have played a sport professionally are ineligible to participate in that sport or its equivalent.

Team Roster: Once a player plays with a team in that sport, they are permanently added to that team’s roster, and may not play for another team. Roster additions are made at the game site. During playoffs, all players must have played in at least one regular-season game to be eligible to play during playoffs. Although participants are not limited to the number of intramural sports they can compete in, participants may not play on more than one team in a given league (Men’s, Women’s, Co-ed, Greek) of a sport. They may however play on three teams in the same sport but in a different league. Forfeits and Defaults: If for some reason, your team cannot avoid forfeiting a scheduled game, common courtesy REQUIRES that the intramural staff be notified well in advance of the scheduled playing time. If a team cannot make a scheduled game but calls the intramural staff by 3 p.m. the day of the game it will result in a default resulting in a loss and decreased sportsmanship. Games lost by forfeit or default will not be rescheduled for any reason. Two forfeits by the same team in one season will prohibit the team from entering the playoffs entirely.

Rescheduling: League games are usually unable to be rescheduled due to time and field space constraints, unless extreme circumstances prevail. Defaulted and forfeited games will not be rescheduled for any reason. If a team cannot make a game the team may request one game change prior to the start of the season. Change requests must be made to the Intramural Area Supervisor by emailing imsports@mail.montclair.edu. This does not guarantee the request will be approved.

Playoffs: All teams entered into the playoff bracket must compete in regular-season play with no more than two forfeits, and maintain a sportsmanship rating total of a 2.5 or better concluding regular season. The playoffs will use regular-season records and statistics to determine seeding. The office will make every attempt to reschedule a tournament game conflict. In order to request a playoff game to be rescheduled the team captain must contact the intramural staff via phone 973-655-3345 or email imsports@mail.montclair.edu. If the game conflict is a first round game the captain must contact the intramural staff within 24 hours of bracket posting otherwise the intramural staff must be notified 24 hours before the game time. The intramural staff will contact the opposing team to confirm a change. If the opposing team is unable to reschedule, the team requesting the change of game must make an attempt to play at the scheduled time.

Protest: Protests based solely on the accuracy of judgment on the part of an official will not be considered. Should a team captain wish to protest it must be done by filing a protest form with the on-site director immediately following the play in question.

Individual Suspension: Any player or spectator deemed by Intramural Staff not acting in the best interest of the Intramural Program and Sportsmanship can be suspended. Reinstatement will be pending an investigation and a meeting with the Coordinator of Intramural and Club Sports. Any player who is ejected from a game is AUTOMATICALLY ineligible for the next game and, if warranted, more than one game.

Team Suspension: Any team deemed by Intramural Staff not acting in the best interest of the Intramural Program and Sportsmanship can be suspended. Reinstatement will be pending an investigation and a meeting with the Coordinator of Intramural and Club Sports.

Every team is guaranteed at least 4 regular season games and 1 playoff game (if qualify) depending on the sport. . All playoff divisions will be single elimination.

Regular Season: If a tie should occur during regular league play, the outcome of the game will stand as a tie.

Playoffs: If a tie should occur during playoff competition, the game will go into overtime play as determined in the specific rules of each sport. The game will be played until a winner is declared.

Participation in the Intramural Sports Program is voluntary which means that the individuals assume all responsibility for their own health and safety. The risk of injury is inherent in many of the recreational sport activities offered by the Intramural Sports Program. Therefore, it is strongly recommended that individuals intending to participate in intramural sports should, for their own protection, have a physical examination to determine if they are physically able to participate, be fully aware of inherent risks involved in that sport, and have medical insurance to cover expenses incurred in the event of injury.

Drug and Alcohol Use: