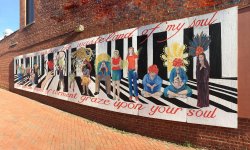 An Initiative of the College of the Arts and Department of Art and Design, The Mural Project is a Community Partnership.

The project evolved from an initial proposal of the former Montclair Arts Council, brought forward by Councilman Dale Jacobs in early 2010, to install public-art murals in the Township of Montclair.  Years prior, University representative Asst. Dean Linda Davidson had proposed a similar idea to the Township Municipality, i.e. that University art students be enabled to develop a mural for the walkway between the east side of Valley Road and the public parking lot.  With a fresh proposal from the Arts Council, support provided by the former Montclair Parking Authority, interest expressed by the  University’s faculty, and a willingness on the part of building owner Vanik Properties to allow use of the proposed space, the time became ripe to solidify a new town/gown/business partnership.

In November 2010, under the direction of Profs. Julie Heffernan and  Zachary Wollard, “The History of Montclair” mural was created and installed on the south wall of the site.  The artwork was a 35-by-8-ft. painted canvas reflecting elements of nature and depictions of the town’s history and its people.

Not long after installing the first mural, Prof. Heffernan and students became inspired by the wall opposite.  Characterized by five defined bricked-over windows, the structure seemed to beckon an installation of five individual artworks within the spaces. “Word Play” — based on a theme of plays on words — was, thus, created and installed on the north wall of the walkway in June 2011.

In June 2012 a new piece, “Painting Adversity” replaced the original mural to recognize the contributions of community organizations in Montclair.

The Department of Art and Design Mural Project is located in the northern business district of Montclair, New Jersey, occupying walls leading from 605 Valley Road to the back public parking lot. It is hoped that the project will continue to grow and expand to other locations within the tri-county area that is inhabited by Montclair State University.

The concept for this mural evolved as a way to represent the arts in Montclair, depicting of the lively and growing arts culture that the town of Montclair has nurtured and supported over the years. It was a challenge and an extremely rewarding experience for both collaborating artists, Luisa Henao and Anthony Coplan, both undergraduate painting students at Montclair State University.

Although Mr. Coplan and Ms. Henao originally designed the mural to be viewed in passing from either direction, they re-oriented it to feature events in the life of Montclair from left to right. They begin at the Iris Garden showing people appreciating and cultivating the beauty of the communal garden. Subsequent panels transport the viewer to the bustling boulevards of Montclair, where arts thrive at the Montclair Art Museum, then to the various festivals like the Montclair Film Festival and the city’s jazz festival, as well as the town’s diverse restaurant and culinary arts scene. With Montclair’s history of support for the performing arts in mind, the students worked to incorporate both its outdoor performances and indoor venues in the mural, as well as representing the acclaimed Wellmont Theater.  The artists also intended to present the artwork with a strong chromatic and linear sensibility, engaging and guiding the viewer from one panel to the next, with the intention to stimulate, intrigue, and inspire.

The mural, “Painting Adversity,” is dedicated to the good works performed by Montclair’s not-for-profit community organizations, based on a concept of Prof. Julie Heffernan and student collaborators to recognize “local heroes.”  As an example of the organizations’ various missions of service, the students focused on Partners for Women and Justice, a non-profit which provides free legal assistance to victimized women and their children.  The combined realistic and abstract imagery of the mural depicts the theme of “Family Violence” and how it is often couched in a veil of silence. The location itself also lends a context to the work in that it is situated in a “dark alley.” Students felt the environment conceptually resonated with the subject, of which is oftentimes cloaked in neglect and secrecy. The mural illustrates both the vulnerability of children, who are depicted within the shadowy areas of the brick facade, in contrast to the implications of a community working together to overcome obstacles dealing with abuse. The ultimate intent of the work is to call attention and pay tribute to altruistic missives of organizations such as Partners and how positive contributions can have an impact on both a global and community level.

The “Painting Adversity” project was coordinated by Prof. Catherine Bebout and created by students Laken Whitecliffe (lead artist) along with Jeremy Bell and Ariel Williams.

Partners for Women and JusticeCommunity Organizations of Montclair