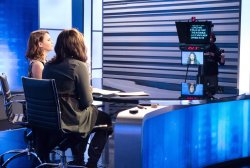 Our driven students and experienced faculty work collaboratively to produce a breadth of programming that is timely and engaging. The School of Communication and Media strives to provide the environment and expertise necessary to produce high-quality, professional grade work.

In addition to providing programming for the northern New Jersey television community, Carpe Diem provides Television majors with rigorous weekly production assignments that simulate those of the broadcasting profession. Over the semester, students produce a minimum of fifteen programs. Apart from producing their own works, it is not uncommon for students to have acquired production credits for as many as 20-30 additional programs by the time they graduate.

Carpe Diem reaches about a half-million households in New Jersey.

Montclair News Lab works in collaboration with other Montclair State University media brands in the School of Communication and Media to combine their most compelling stories of the week for the broadcast.

These include the following:

Over the course of the year, the School of Communication and Media produces several live webcasts, usually in response to something happening in the news or subjects affecting students personally. Students, faculty and staff work alongside each other in the preparation and execution of the project.  Webcasts have embraced topics such as reflecting on 9/11; the effects of student bullying; and campus bias incidents. Presentations are distributed over the internet using streaming media technology and are also available on demand.

The School of Communication and Media’s Special Video Projects provide students the opportunity to work on external client-generated projects, where their skills and talent may benefit the community. Past clients for Special Projects have included the New Jersey Division for Youth and Family Services, the SIDS Center of NJ and Advocates for Bayonne Children.

The Montclarion is the University’s student-run newspaper and news web site. The publication gives students the opportunity to develop their skills in a multi-platform media environment where they can gain practical experience as reporters, photographers, copy editors, graphic designers, and web editors.

Opportunities are available to all University students to contribute content to The Montclarion, regardless of their major area of study. The experience is especially valuable for those interested in a media career whether in print publication, web management, television or radio.  Journalism students are especially attracted to working on The Montclarion where they have an opportunity to hone their skills in writing publishable content for a variety of sections, including News, Sports, Opinion, Features plus Arts and Entertainment.

For more information about The Montclarion, contact the editor-in-chief at monteditor@gmail.com

The Voice of Montclair State University

WMSC-FM features a variety of programming including alternative music, news, sports, talk and special features.  It is operated largely by University students with support from the School of Communication and Media’s professional staff.  The station broadcasts locally at 90.3 MHz and worldwide via www.wmscradio.com.

Students in the School are especially encouraged to become involved with WMSC to gain hands-on experience with radio broadcasting and streaming as communication mediums.

Additionally, WMSC welcomes all Montclair State University undergraduate students to join the organization. There are several opportunities for on & off air positions. Training is provided by our staff.

The Montclair State University PRSSA was first chartered in 2008, and since that time has worked with an impressive list of high profile clients. Its first project was to create communication products for the two time AP Female Athlete-of-the-year, LPGA Hall-of-Fame golfer Lorena Ochoa. It has also produced fundraisers for the John Theurer Cancer Center at Hackensack University Medical Center, which have been headlined by famed Olympic gymnast Shannon Miller and LA-based comedian Sunda Croonquist. It cosponsored, with the Metropolitan Opera Guild, a series of high school singing competitions titled The Curtain Call Awards.

The PRSSA’s fundraising work for Autism New Jersey has grabbed headlines across the nation. The student organization’s gala benefits have been headlined by Tony winners Laura Benanti and Melba Moore, multiple Tony nominees Marin Mazzie and Stephanie J. Block, and even a film star, Moira Kelly (“The Lion King,” “The Cutting Edge,” and “Chaplin”). The Montclair State University PRSSA is also informally affiliated with The New Jersey Advertising Club.