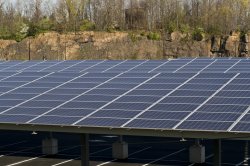 We are determined to encourage and develop a responsible and responsive campus community that will foster positive behaviors and attitudes towards environmental stewardship for the sustainability of both the present and future generations. Montclair State is committed to developing community and global partnerships in our mission to assist with the attainment of sustainability at both national and international levels.

Montclair State is a member of the Association for the Advancement of Sustainability in Higher Education (AASHE). All campus community members are eligible to sign-up for a free account which will allow them to access AASHE’s resource hub and communities.

Green buildings are structures designed and constructed in a manner which reduces their impact on the environment and public health through the efficient utilization of resources.

Montclair State University has several buildings that have been certified under Leadership in Environmental and Energy Design (LEED):

The facility and its related improvements replaced the campus’ former energy plant which began generating steam in the 1940s and providing electricity as a co-generation plant in 1993. The project’s development resulted in more cost-effective, efficient, and reliable delivery of heating, cooling, and electrical services to campus buildings.

The plant provides natural gas-fired electric generation, chilled water for cooling, and steam for heat. The steam, condensate, and chilled water flow to and from campus buildings through the new energy distribution system. Additionally, the majority of the campus’ electricity requirements are satisfied by the onsite plant, which is designed to operate continuously, producing electric power of approximately 5.4 megawatts. The plant is located on Yogi Berra Drive, adjacent to the campus’ CarParc Diem parking garage.

The University developed a MicroGrid as one of our energy management strategies.

NJ Transit Discount – To promote the use of public transportation and reduce the number of single occupant vehicles driven to campus, Montclair State and NJ Transit have partnered to offer full-time undergraduate and graduate students a 25% discount on a rail, bus, or light rail monthly pass when they enroll online through NJ TRANSIT’s Quik-Tik program.

Alternative fuel vehicles – Montclair State has electric vehicles for staff to use on campus as an alternative to diesel powered golf carts. These vehicles are used by various shops/departments within Facilities and Dining Services.

Zipcar – Montclair has partnered with Zipcar for car sharing services on campus at a discounted rate for MSU students, faculty, and staff.

Montclair State currently utilizes a single-stream recycling system through an offsite contractor. In addition, all yard waste from grounds maintenance is collected for composting off-site.

The office of Information Technology at Montclair State University has established a computer life-cycle replacement program to keep all computers for faculty and staff and those in public and teaching computer labs up to date. An inventory of all computers at the University was compiled and a replacement program plan was created. The goal of the program was to replace the computers in the public and teaching labs and provide all full time faculty and staff members with one primary computer. The program was later expanded to include some computers for part-time employees, students and graduate assistants. The Office of Information Technology does three-year leases on the facilities computers. Montclair State has agreements with DELL, IBM and Hewlett Packard to send back old computers to the manufacturers so they can be recycled.

All e-waste that is not leased or returned to the supplier at the end of the life-cycle is collected and recycled by Urban Renewal Corp.

During the summer of 2019, Facilities sponsored a Green Team through the PSEG Institute for Sustainability Studies. The Green Team completed a study of water usage in our residence buildings and determined that a large savings could be realized by replacing older faucet and shower fixtures with newer, more efficient models. The process of retrofitting all of these buildings is underway.

Drought resistant and native plants are installed in the landscaping around all newly constructed buildings, eliminating the need to install sprinklers/irrigation systems to water the plants.

Waterless urinals were installed in the bathrooms located in University Hall in 2004. The waterless urinals use Ecotrap which consists of a lightweight biodegradable fluid called Blue Seal. The liquid traps the odors and sediment drops to the bottom of the trap to help prevent the pipes from clogging. The waterless urinals do not overflow and have reduced water usage by 45,000 gallons per year for each urinal. This program has continued in all newly constructed buildings – Center for Environmental and Life Sciences, School of Business, School of Communication and Media, and College Hall.

In 2009, Montclair State University became the first educational institution in the nation to sign a Memorandum of Understanding (MOU) with the Environmental Protection Agency (EPA) committing to utilize the latest green technologies and practices on its 246-acre campus. By signing the MOU, the University agreed to management and operational principles that will ensure that it meets high environmental standards and reduces its carbon footprint.

The Center for Green Schools is working in partnership with students, faculty and administrators to strengthen campus sustainability efforts.

The Center and USGBC aim to increase accessibility to LEED for educational facilities and campus development, support student leadership and advocacy efforts and promote sustainability in the curriculum.