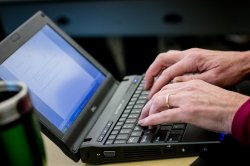 As part of our ongoing efforts to replace older, less efficient equipment on campus with more efficient models, University Facilities upgraded the cooling equipment in the walk-in refrigerators and freezer at the Freeman Dining Hall in early February 2021.

The new condensers are air-chilled units which are more efficient and will save a significant amount of water. In fact, the water savings alone will pay for the project cost in less than one year. The total annual cost of water for the four old condenser units was approximately $75,500 and the replacement was completed for a total project cost of $65,000.

University Facilities is excited to be able to perform these types of equipment upgrades and looks forward to completing more in the future.

How much water are we actually saving?

We’ll need to do some math to figure it out.

One condenser unit in the walk-in freezer used 480 gallons of water per hour with an average operation time of 16 hours per day for 365 days per year.*

One condenser unit in a walk-in refrigerator used 288 gallons of water per hour with an average operation time of 18 hours per day for 365 days per year.*

The Freeman Dining Hall has one freezer and three refrigerators, so

*figures were obtained from the equipment’s manufacturer.

**at 2.1 gallons per minute per the average 8 minute shower (source) and 20 gallons per load (source).