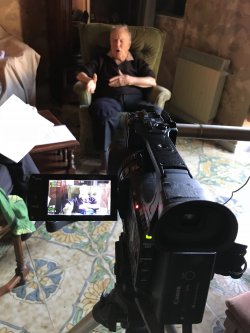 Video Interviews: Food, Hunger, Migration and the American Myth in Sicily at the Time of the WWII Allied Landing

The project “Food, Hunger, Migration and the American Myth in Sicily at the Time of the WWII Allied Landing” encompasses a series of interviews with Sicilian women and men who have direct memories of the arrival of the Allied Forces in Sicily in 1943, as well as the late phase of Fascism and the post-war period. A few interviews were conducted with local historians, journalists, and even a chef, who were too young or still unborn at that time to have direct memories, but have collected valuable materials themselves as part of separate initiatives.

This webpage includes excerpts of the project’s interviews focusing on a few related topics: eating practices under the Mussolini regime, the food that the American forces brought to Sicily, and the ways in which these goods affected the local diet over time, even today. The interviewees’ recollections are inevitably mixed with stories of migrations, since the “arrival of the Americans” was indirectly experienced as the return of that portion of Sicily who had relocated across the ocean.

See project’s official webpage for a full description of the premise, content and goals, supported for two consecutive years by Angelo and Marie Cali Fund for Italian Studies with matching funds provided by the Inserra Chair Endowment at Montclair State University (this project is IRB-approved).

Ingiamo’s recollections of the late Fascism are among the bleakest: while he remembers that the locals, no matter how poor, still had salt-preserved sardines and olives to accompany their meager bread, he also remarked that food would also be a figment of the imagination in some cases, as he shows in this telling anecdote. His testimony is in stark contrast with that of Maria Di Prima below.

Di Prima’s memories of the later part of the Fascist period are the direct reflection of the social status of her father, an established functionary of the Fascist government, with a particularly key role in the control of food provisions, as an agrarian inspector. Her vision of the wartime was one of secure access to food, in which the food distributed by Americans was a playful addition, but not a necessity. Her testimony depicts a scenario radically opposite from that of Antonio Ingiamo’s above.

Ballacchino’s awe-filled memory of the Landing is a perfect start to convey the mythic quality of the arrival of the Allies.

Cuttaia’s precious addition to the project starts with a powerful image of the impact of the arrival of the Allied forces on the locals’ ravenous acquisition of food. His stories also include the recollection of a museum visit that enhanced his knowledge and perception of WWII military rations, and the description of the dish he created as a pluri-awarded professional chef, in part based on the museum visit, but also on personal memories of the post-war period, when the family diet was re-designed to counterbalance the wartime deprivation.

2.  The dish “Visual memory” in Cuttaia’s menu as a reflection on the post-war diet

Iacona’s father’s job in the construction sector, and its related respectful social position, allowed the family to maintain access to food, as well as more non-essential items such as cigarettes. Still, the American food was welcomed as a wonderful addition for its color (white bread, yellow butter) and lightness: despite the widespread legend that it could be poisoned and locals had to stay away from it as the enemy’s food, it became quite popular soon.

Cambiano’s contribution has a fairy-talish quality, perhaps because he was so young. Food containers became magical objects and the arrival of the American soldiers was celebrated as the visit of special guests who gave and received food as part of an exchange often made easier by the fact that many of them were Italian Americans. Even though there was no direct relationship to them, they were embraced as family members.

As a 13-year-old in 1943 and son of a policeman, Allotta was a keen observer of the situation at the time of the landing. Over time he added to these personal stories the analysis of documents, and published on the topic, thus becoming a local historian of the period in Agrigento. The interview with him was extensive and yielded a plethora of stories about the wartime rationing, the goods distributed by the Allies, the reception of the Allied forces in connection to Fascism and emigration, and more.

MARIO TURCO (b. 1930 – Gela, province of Caltanissetta, son of a construction worker)

Turco’s memories of rationed and contraband food during Fascism and the war are still quite vivid. In his recollections, the arrival of the Americans is also an occasion to remember the presence of the Germans within the local community.

PINO (Giuseppe) LA ROSA (b. 1928, Valledolmo, province of Palermo, son of a tailor, and a tailor himself)

La Rosa’s testimony includes one of the most powerful -and ironic – stories about the arrival of the American troops in his small village in the heart of Sicily. A euphoric supporter of the Allies inadvertently ended up run over by a U.S. tank.: in his tale, liberation and death coalesced. La Rosa’s specific recollection of the goods introduced by the Americans provides yet another perspective on the locals’ reaction to canned food: while above we have seen curiosity and excitement or by contrast fear of poisoning, he associates this food with deprivation and poverty, which made his family decline the Americans’ offer in order to declare their social standing.

1. Raffaele Quignones’ testimony
“In general interactions with the Americans in the area were good and marked by mutual respect. I remember friendly encounters with some American soldiers: sometimes they just enjoyed talking with us or with our guest who had come back from the US just before the war and spoke their language well, or with my uncle Raffaele who spoke English. On those occasions we were offered some little packets of white sugar (which we hadn’t seen for a while because what was sold or rationed on the market before the landing was a kind of brown molasses), some cans of pressed meat, some chocolate, and other stuff to eat which couldn’t but whet the appetite of a kid at the time of the landing.I can recall vividly a certain cheese spread, orange in color, which I never knew existed, nor have I ever tasted since.

But I also remember two incidents which occurred and which in some way contradict what I just said about dealings with the American soldiers, that bring to light the climate of confusion that dominated at the beginning. One day a bunch of American soldiers burst into the courtyard next to our house with guns pointed and raided all the chickens – making off with about 70″ (p. 148)

2. Ina Cambiano’s testimony
“Two days after the landing we saw George and Robert come back in a jeep loaded with everything under the sun – cans, candies, coffee, sugar, chocolate, and a yellow butter and cheese, which when eaten with bread, was really good. The cans came in many shapes and colors, and attracted our curiosity most of all, in figuring out how to open them. They were round with a little key posted on the top of the can which had a little flap to insert the key. By turning the key along the can, the cover rolled around itself until it revealed the full contents inside the can: round cookies, candies, sugar cubes, chocolate. We competed at opening a can. That was the first time we saw one in Italy and they haven’t been seen ever since.” (p. 63)

3. Giuseppe Castellino
“After the landing things changed. I got what I needed by bartering food: cans, sugar, coffee. I remember going as far as Torre di Gaffe, where the American went to buy wine, especially Zibibbo of which they couldn’t get enough. In fact they wanted all the wine. One time a truck arrived in San Paolo and parked outside a wine shop. Some black soldiers got out, went into the shop, and without saying a word, walked out with the whole barrel of wine on their shoulders – without paying. The stunned owner watched as they took off. […] At that time I had a donkey to carry my provisions such as live chickens – the Americans would snap the necks by grabbing their heads and swinging them around the air a couple times.” (p. 135)

4. Lina Cellura’s testimony
“I remember that day … I had my youngest brother in my arms – he was only three. A soldier approached and took out a piece of chocolate from his backpack, offering it to my brother who reached out his hand to take it. My terrified mother stepped in the way to make it clear she would not permit the child to have it. The soldier understood my mother’s fears about the candy being safe, and waved his hand as if to remove the invisible block between them. Whispering “c’mon”, he unwrapped the chocolate bar, took a bite, and again offered it to my brother who this time accepted it under the approving eye of my mother, whose fears seemed to have vanished. The wall of fear was gone – for a moment mother and soldier watched as he devoured the candy with an expression of pure joy […] We used to leave tomatoes on the mat to dry or to make tomato paste, and the soldiers feasted on them, leaving not a single one.” (p. 80)