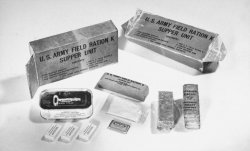 Food, Hunger, Migration and the American Myth in Sicily at the Time of the WWII Allied Landing

This in-progress research project about food practices, military operations, and human mobility in Sicily before and after 1943 tackles the following questions:

What did Sicilians eat during the last part of Fascism during WWII, and what did the Allies bring to their diet? Was locals’ access to food extremely challenging across the board or did the anti-Fascist narrative of a deprived Sicily (and Italy by extension) serve the interest of the Allied landing in 1943 with its distribution of packaged and canned foods? Finally, was the perceived and self-perceived condition of destitution a reflection of an exaggerated image of the U.S. as the Land of Abundance that decades of migration from Italy had already created in the minds of the locals?

The project was conducted during the summer of 2018, on the occasion of the 75th Anniversary of the Allied Landing in Sicily, with the support of the Angelo and Marie Cali Fund for Italian Studies. Matching funds were provided by the Inserra Chair Endowment for partial expenses of the Summer 2018 phase, and the Winter 2019 phase. The project received a second round of support from the Cali Fund for Summer 2019.

The project has already resulted in two presentations and the organization of a lecture:
1. Panel contribution at the July 5, 2019 conference “The Taste of War: Values and Meanings of Food in WWII Italy and France” held at the School of Advanced Studies, University of London, U.K
2. Contribution at the July 10, 2019 panel organized to commemorate the 76th anniversary of the Allied Landing in Licata itself. See article and photo.
3. Organization of a lecture given by a scholar not directly involved in the project with an established expertise on the matter (Spring 2021): The Taste of WWII: International Tensions and Local Solutions for Food Supplies by Lizzie Collingham

The project is inspired and connected to the novella “The American Aunt” (included in the collection The Sicilian Uncles, 1958) by renowned Sicilian writer Leonardo Sciascia, who deftly explored the entanglements of transnational migration and conflict in Sicily around the 1940s, as they manifested themselves in food provisions and practices.

A brilliant early work by Sciascia, the novella is a study of family, regional and international relations with the U.S. that ultimately condemns boastful American largesse – embodied by “The American Aunt” – as much as the boastful austerity imposed by the Fascist regime.

The first phase of the research project was completed between late-June and early-July 2018 in Sicilian villages that experienced the arrival or passage of the Allies troops in 1943. This phase interviewed ten senior residents of Valledolmo, Licata, Gela and Agrigento, who have direct memories of that period, and a local historian (Carmela Zangara) who has published on the subject. The interviews have so far revealed very different perspectives and experiences about food consumption and reaction to the arrival of the Allies and their foods, based on the local residents’ different socio-economic backgrounds, political leanings, and geographical locations, somewhat confirming Sciascia’s adage about truth being always the result of many truths. The second phase of the project (Winter 2019) embraced other six interviews in Licata and Palermo, focusing on the memories of women and direct and indirect testimonies on the part of an established writer from Palermo, Gaetano Basile and a renowned chef, Pino Cuttaia.

Teresa Fiore is the Theresa and Lawrence R. Inserra Chair in Italian and Italian American Studies at Montclair State University. The recipient of several fellowships (De Bosis, Rockefeller, and Fulbright), she was Visiting Assistant Professor at Harvard University, NYU, and Rutgers University.
She is the author of Pre-Occupied Spaces: Remapping Italy’s Transnational Migrations and Colonial Legacies (Fordham UP 2017, winner of the 2017 American Association of Italian Studies Book Prize in the 20th-21st centuries category, and an Honorable Mention at the 2018 MLA Marraro Prize in Comparative Literature involving Italian), and the editor of a special issue of Quaderni del ‘900 devoted to John Fante. Her numerous articles on migration to/from Italy linked to 20th- and 21st-century Italian literature and cinema have been published in Italian, English and Spanish in both journals and edited collections. Her latest project is a co-curated special section (with Ernest Ialongo) titled “Italy and the Euro-Mediterranean ‘Migrant Crisis’: National Reception, Lived Experiences, E.U. Pressures,” included in an issue of the Journal of Modern Italian Studies (Sept. 2018).
Kenneth Browne is pursuing the post-BA Certification in Italian at Montclair State U through the Adult Learning Program. He holds a MA in Italian from Yale University and has an established record in professional video-making based on interviews and research. As a non-traditional student interested in starting a new career in teaching, Kenneth brings a wide array of expertise to this project. For more information see this post.

To share the link to this project, use: https://tinyurl.com/FoodWWII