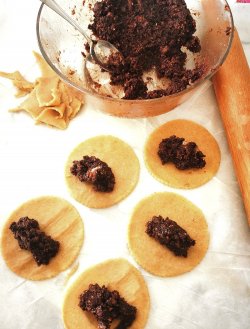 Gastronomía Is Just an Accent Away from Gastronomia: An Italian/Spanish/Latin American Cooking Workshop

Gastronomía Is Just an Accent Away from Gastronomia: A Cooking Workshop and Tasting about Spanish and Latin American Influences on Italian Dishes

This workshop draws on the vast array of dishes that are the result of the influence of Spanish and Latin American cultures and products in those areas of Italy that were under the Spanish Empire (Milan as well as Naples and Sicily) roughly between the 16th and 18th centuries The title – focusing on the profound similarity between the Italian and Spanish languages (indeed only a written accent differentiates the two terms in writing, while the pronunciation is exactly the same!) – highlights the proximity of food cultures produced by the commercial routes and social exchanges designed by the Spanish Empire connecting places as distant as Italy, Spain, and Latin America. The event is linked to a broader project about these influences in film, literature, etc. called Memoria presente. For an overview of the specific culinary cross-pollinations prompted by transnational and transcontinental commercial routes, see this page (password NEH2021Fiore)

The menu includes some classic dishes of the Sicilian gastronomy (caponata and potato croquettes are very popular appetizers/finger foods), as well as recipes that are more common in specific areas of the island like Trapani (see the pasta dish, busiate al pesto). The desserts are quite unique to Modica in Sicily, and while the Aztec chocolate bars are by now a well-know product well beyond Sicily, the ‘mpanatigghi are definitely local, and a hidden gem. For this reason, the focus of the demo will be on the ‘mpanatigghi.

* See also a household recipe for a variant of the “impanate” with spinach filling, as recorded in the 1970s by a Sicilian immigrant from Sicily to the U.S.: Rosina Pistritto Giardina, born in 1899 in Francofonte in the province of Siracusa, emigrated in 1918 – photo)

Giuseppe de Falco developed his passion for cooking in the rural environment of his childhood, i.e., Carife, a small town located in the Irpinia hills in the province of Avellino. He attended a culinary school and worked in restaurants in that region, specializing on local ingredients and ancient recipes. At the age of 25, he started traveling to expand his knowledge and techniques: among other countries, he visited and worked in Chile and Argentina, where he learned about meats in depth. This experience allowed him to see the connections between Italian and Latin American cuisines, which still play an important part in his approach to cooking. In 2013 he moved to New Jersey, where he has offered his expertise in various restaurants.

He is about to open his own restaurant, called Stazione Antica, in Montclair with the plan of offering a classic Italian menu revisited in a modern key. He lives in Montclair with his Colombian wife and two children.

Federica Heiman is a free-lance boutique chocolatier based in Montclair. She is the owner of a local brand (Dolce Federica) that specializes in small batch, creative delicacies. Born and raised in Italy, Federica trained in multiple places around the world, including Italy, France, Israel, Brazil, and Costa Rica. In her work, she blends the traditional scents and flavors of her native country with innovative processes, leading to the introduction of, among others, Limoncello, Aceto Balsamico, Basilico and Extra Vergine infused ganaches.

Dolce Federica even offers its own hazelnut spread, a fresher and more nutritious option for us Nutella lovers. Her approach is well captured by the sign off of her communications: “So close your eyes, take a bite”. She aims to instill a deeper appreciation of cacao, of high-quality chocolate and of Italian regional products and cuisine. Hundreds of enthusiasts have participated in her small group chocolate making and decorating classes, which now include a virtual option that has attracted an international audience. Dolce Federica has earned multiple awards and has had flavors achieve finalist status in the prestigious International Chocolate Award competition. Since first being discovered and nominated back in 2016, the company has been consecutively voted #1 in the “Best of Essex” awards.

Annalisa Pompeo is a free-lance chef based in Italy and the owner of a company that promotes Sicilian gastronomy through cooking classes and events supporting local producers (Go Sicily).

Following a passion nurtured since she was a young girl under the guidance of her grandmothers in the countryside of Favara, near Agrigento, Annalisa is inspired by a farm-to-table philosophy steeped in the Mediterranean diet. Her start-up has only grown over the years, taking her to the United States on more than one occasion, as well as to Cologne, Germany where the Italian Cultural Institute invited her for the 2020 Week of Italian Cooking in the World. Her approach interweaves cooking, storytelling and, when applicable, language learning in environments that range from private homes to contemporary art exhibition spaces, such as those of the innovative Farm Park. Annalisa collaborates with the Diodoros project, which supports bio-diverse preservation farming in the Valley of the Greek Temples in Agrigento, a UNESCO archeological site also known for its almonds, olives, and protected black bees. During the pandemic, unable to travel and given cooking classes live, she designed a colorful box to circulate a selection of local specialties: the box also comes equipped with a Q code that provides access to cooking videos. For her ingenious and creative take on her self-crafted business she was granted the First Prize in the prestigious competition “Impresa è Donna” (Enterprise is Female) 2021, given out annually by the Chamber of Commerce of Catania. Annalisa was recognized as best Sicilian business woman for her resilience, passion, and professionality. Annalisa Pompeo has already been a guest chef for a 2021 Inserra event dedicated to the general theme of the influence of Spain and Latin America on Italian dishes: the workshop focused on the Aztec chocolate in Sicily.