The Cali School of Music has a GRAMMY Winner in the house! 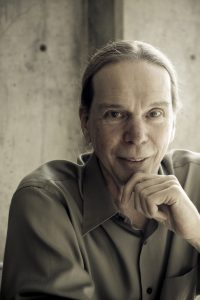 Johnson says, “Lyle Mays was my uncle and mentor. I sang on the world premiere performance of the piece that won the Grammy for Best Instrumental Composition, “Eberhard”, back in 2009. Lyle retired from music in 2011, and it wasn’t until he became ill in 2019 that he decided that it was of the utmost importance to record “Eberhard” were he not to survive. I sang on the recording that year, in 2019, along with 16 other musicians including notable jazz players Bill Frisell, Bob Sheppard, and Alex Acuña. The final mixing sessions were completed with Lyle before he passed away in February of 2020. Following Lyle’s passing, it was put to me to figure out how to release “Eberhard”–a 13-minute, long-form composition–into the world. I decided to independently release it as a single track CD, vinyl, digital download, and streaming album, and it came out in August of 2021. My team and I promoted and publicized the piece, including a rigorous Grammy campaign, and everyone was elated when the best possible outcome occurred last month with a Grammy win–Lyle’s 12th win, and the first under his name alone (all of his previous Grammys were with the Pat Metheny Group, which he co-founded and composed, arranged, and played keyboards for for over 30 years).

Congratulations to all involved, we are so proud of Professor Johnson for her talent and her steadfast dedication to this important project!