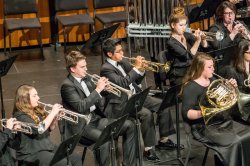 MSU Symphonic Band is an audition-only ensemble.
Any non-music major with an interest in participating in these music major groups should contact:
Dr. Thomas McCauley
Director of University Bands
John J. Cali School of Music
mccauleyt@montclair.edu

‌The Montclair State University Wind Symphony, directed by Thomas McCauley, is a 60 member auditioned ensemble of undergraduate and graduate students who are experienced instrumentalists. Students from all schools in the university who are in good academic standing are welcome to audition. It performs a wide variety of works from the standard band repertoire, commissioned pieces and chamber works. The Wind Symphony has appeared with such notable soloists as Donald Batchelder, Principal Trumpet of the New York City Opera, and James Markey, principal trombone of the New York Philharmonic. In 2007, the group presented the world premiere of David Gillingham’s Symphony No. 2 (“Genesis”). In spring 2010, they performed the premieres of Transformed Spring by composer and faculty member Patrick J. Burns, and Harriet by O’Neal Douglas. Recent performances have included works by Chagrin, Bernstein, Harbison, Higdon, Verdi, Colgrass and Mozart.‌ The Wind Symphony has performed Stravinsky’s Symphonies of Wind Instruments (1947), Haydn’s Concerto for Trumpet in E-flat featuring the winner of the annual Montclair State University Wind Symphony Concerto Competition, Maslanka’s Symphony No. 4, Stravinsky’s Concerto for Piano and Wind Instruments with pianist Ronald Levy, Hindemith’s Konzertmusik für Blasorchester, and the world premiere of Elizabeth Brown’s Zeppelin.

MSU Wind Symphony is an audition-only ensemble.
Any non-music major with an interest in participating in these music major groups should contact:
Dr. Thomas McCauley
Director of University Bands
John J. Cali School of Music
mccauleyt@montclair.edu

Campus Band and Pep Band are looking for members!

Got musical talent you want to share? The Campus Band and the Pep Band are both looking for members. Check it out:

Campus Band
This concert band meets on Tuesday evenings from 6:00pm-7:50pm, Chapin Hall, Room 21. We perform one concert on campus each semester. No audition is required! All you need to do is let Professor Teddi Sotiropoulos at sotiropoulot@montclair.edu. He will let you know when the first rehearsal is. Don’t forget to bring your instrument! This ensemble is open to all majors, faculty, staff, AND members of the local community!