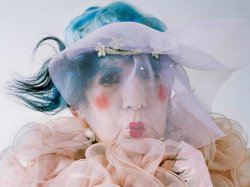 Anna Piaggi: Creativity and Passion In and Beyond Fashion

A unique opportunity to learn about the extraordinary career of journalist and fashion writer Anna Piaggi through her nephew’s presentation, which will show how her brilliant creativity has served as a lifeblood for designers, photographers, illustrators and fashion lovers.

Muse to designers and fashion enthusiasts, fashion icon and collector of garments from all eras and styles, Anna Piaggi lived through 50 years of international fashion history, influencing and dictating trends, experimenting, searching and drawing inspiration and references for her extraordinary story from a plethora of fields: from art and design, cooking and cinema, theater and botany.

She began her career as translator for Mondadori and collaborated with Epoca and Panorama magazines. From 1961 to 1968 she was the Fashion Editor for Arianna magazine. Starting in the late ’60s, she began contributing to Vogue Italia, with ravishing fashion editorials; from 1988 until 2012, when she died, she wrote a column entitled “Doppie Pagine di Anna Piaggi” for Vogue Italia, followed every month by her numerous and devoted admirers around the world. In 1999, her second book, an edited collection of a decade of “Doppie Pagine” articles, called Fashion Algebra, was published. For her style, Anna Piaggi, known as “a walking museum,” was named to the International Best Dressed List numerous times and was inducted into its Hall of Fame in 2007.Her intriguing personal and professional story has been depicted in Alina Marazzi’s 2016 documentary Anna Piaggi: una visionaria della moda, clips of which will be screened during the presentation (the full documentary is available here)