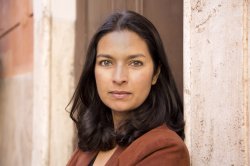 In the past few years, Pulitzer-Prize-winning author Jhumpa Lahiri has become a translator, a practice that carries intense personal and political meaning for her and about which she is theorizing in sophisticated and yet accessible ways. After learning Italian and living in Italy for a while, Lahiri has embraced translation as a crucial creative and intellectual activity in the footsteps of several canonical writers from around the world who believe/d that writing is about languages. A courageous choice for an acclaimed fiction writer like her, whose position in the Anglophone world has been established for a long time, translation allows her to rethink herself as a person and a writer at a time in which monolithic forms of cultural and linguistic belonging still persist, and even grow in popularity. Back in 2000, Lahiri published a short story penetratingly titled “Interpreter of Maladies” and pivoting around the individual and social implications of traveling between languages. Almost two decades later, she has worked on a ponderous book, in which she functioned as both editor and translator in part, The Penguin Book of Italian Short Stories. In its introduction, Lahiri uncompromisingly states: “Only translations can expand the literary horizon, open doors, and knock down walls.” This powerful statement will be the starting point for a conversation about the crucial role of translation in today’s world as an art and a political tool, and even a revolutionary act, that speaks to (pun intended) all of us, regardless of our cultural backgrounds, socio-economic extraction, professional and student roles, and personal interests. Please join us for an evening which promises to be a fascinating journey across borders.

As part of her visit on campus, Lahiri leads a workshop on the multiple meanings of the act of editing, and in part translating, a collection of short stories that, while occasioning the discovery of another literary tradition, become an inspirational force for new creativity. By looking at select short stories included in the anthology, Lahiri analyzes linguistic, cultural, historical and political issues linked to the authors and texts, and reveals her rationale in choosing them for the collection. If her starting point remains Italian literature, her considerations travel in several directions that will be of relevance to students and faculty active in such diverse fields as Writing, English, Translation, International Studies, Political Sciences, Justice Studies, Italian , Spanish, etc. With an eye towards questions of national formation, trans-national cross-pollination, and regional hybridity, Lahiri illustrates the role of literature, and short fiction in particular, in the exploration of identity and belonging at large in an era of mobility that has a rich history behind it, in the 20th century in particular. Knowledge of Italian is not required.

* Faculty interested in attending with one or two students, should contact Teresa Fiore at fiorete@montclair.edu (a copy ofThe Penguin Book of Italian Short Stories is available in the Sprague Library on Reserve for two hours) – NOTE: The workshop has reached capacity

Born in London, Lahiri moved to Rhode Island as a young child with her Bengali parents. Although they have lived in the United States for more than thirty years, Lahiri observes that her parents retain “a sense of emotional exile” and Lahiri herself grew up with “conflicting expectations…to be Indian by Indians and American by Americans.” Lahiri’s abilities to convey the oldest cultural conflicts in the most immediate fashion and to achieve the voices of many different characters are among the unique qualities that have captured the attention of a wide audience.

Jhumpa Lahiri received the Pulitzer Prize in 2000 for Interpreter of Maladies, her debut story collection that explores issues of love and identity among immigrants and cultural transplants. With a compelling, universal fluency, Lahiri portrays the practical and emotional adversities of her diverse characters in elegant and direct prose. Whether describing hardships of a lonely Indian wife adapting to life in the United States or illuminating the secret pain of a young couple as they discuss their betrayals during a series of electrical blackouts, Lahiri’s bittersweet stories avoid sentimentality without abandoning compassion.

Jhumpa Lahiri’s novel The Namesake was published in the fall of 2003 to great acclaim. The Namesake expands on the perplexities of the immigrant experience and the search for identity. The narrative follows the Gangulis, an Indian couple united in an arranged marriage, as they build their lives together in America. Unlike her husband, Mrs. Ganguli defies assimilation, while their son, Gogol, burdened with the seemingly absurd name of the long-dead Russian writer, awkwardly struggles to define himself. A film version of The Namesake (directed by Mira Nair) was released in 2007. Lahiri’s book of short stories, entitled Unaccustomed Earth, received the 2008 Frank O’Connor International Short Story Award (the world’s largest prize for a short story collection) and was a finalist for the Story Prize. She has contributed the essay on Rhode Island in the 2008 book State by State: A Panoramic Portrait of America. Her book, The Lowland, won the DSC award for south Asian fiction, and was a finalist for both the Man Booker prize and the National Book Award in fiction. Her book, In Other Words (Knopf, Feb. 2016), explores the often emotionally fraught links between identity and language. Her nonfiction also includes The Clothing of Books which was originally published in Italy as Il vestito dei libri. She has translated two books by Domenico Starnone; Ties, and Trick. Lahiri’s newest book of short stories is written in Italian and titled Dove Mi Trovo. She recently edited The Penguin Book of Italian Short Stories (Penguin Classics, 2019).

Alongside the Pulitzer Prize, Jhumpa Lahiri also won the PEN/Hemingway Award, an O. Henry Prize (for the short story “Interpreter of Maladies”), the Addison Metcalf Award from the American Academy of Arts and Letters, the Vallombrosa Von Rezzori Prize, the Asian American Literary Award, and the 2017 PEN/Malamud Award for Excellence in the Short Story. Lahiri was also granted a Guggenheim Fellowship in 2002 and an National Endowment for the Arts Fellowship in 2006. In September 2015 Jhumpa Lahiri joined the Lewis Center for the Art’s Program in Creative Writing faculty at Princeton University as Professor of Creative Writing.

Further resources with quotes relevant to the event’s topic

“NO LANGUAGE HAS POWER OVER ANOTHER”: A PEN TEN INTERVIEW WITH JHUMPA LAHIRI” Pen America website by Lily Philpott (September 3, 2019)
Relevant quotes:
“As for translation, for those fortunate enough to know another language well, it is by far the best way to learn to write and to improve one’s writing.” (Jhumpa Lahiri)
“The process of translation makes clear that no one language has power over another.”(Jhumpa Lahiri)
“A willful act of border-crossing, translation is a means of rejecting and contradicting the xenophobic mentality circulating throughout much of the world today.” (Jhumpa Lahiri)

“Everything is Translation” by Mini Kapoor.The Hindu (May 2019).
Relevant quote:
“The act of translation, central to the artistic formation [of the authors included in the anthology], was a linguistic representation of their innate hybridity.” (Jhumpa Lahiri)

Podcast of Conversation with Jhumpa Lahiri, Ann Goldstein, Jenny McPhee at WNYC (Sept. 2019)
Relevant quote (slightly paraphrased): Learning Italian [another language] has created a new reality, has changed my center of gravity as a human being, and has provided me with a new identity professionally and personally. We are lucky to have one life. Being able to have a second one is a gift. (Jhumpa Lahiri)

“The Penguin Book of Italian Short Stories, review: proof that bad things do happen in Italy” by Julian Evans (April 2019)
Relevant quote:
“Wherever we don’t speak the language, we need what happens to be explained to us, as truthfully as possible [by translators], or we’ll never find out.” (Julian Evans)

“Jhumpa Lahiri on reading across continents and cultures” by Amy Sutherland. The Boston Globe (Nov. 2019)
Relevant quote: “Every language is its own reality. The language radically alters your perceptions of everything and your relationships with the world. That is why we’re so fortunate to have different languages in the world.” (Jhumpa Lahiri)

“The Joys of the Italian Short Story” by Jhumpa Lahiri. The Paris Review (Sept. 2019)

Relevant quote: “The act of translation, central to the [anthologized authors] artistic formation, was a linguistic representation of their innate hybridity. The majority of these writers shuttled between dialect and standard Italian; though they all wrote in Italian, it was not necessarily the language they grew up speaking, or the first they learned to read and write in or were originally published in. Four were born outside of present-day Italy, and most of them spent significant amounts of time either studying, traveling, or residing abroad. A few turned to other languages, writing novels in French or Portuguese, experimenting with German and English, teaching themselves different dialects, complicating their texts and their identities further still. Whether linguistic or stylistic, their creative paths were marked by experimentation, by willful mutation. (Jhumpa Lahiri)

“A Mighty Collection with Many Delights” by Desmond O’Grady. The Sydney Morning Herald (April 2019)

Review in The Literary Review by Robert S.C.Gordon (May 2019, p. 46)
Relevant quote:
“This is decidedly not a celebration of monocultural, monumental Italy” (Robert Gordon)