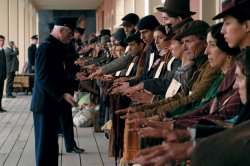 Screening (at the) Golden Door: Actor Vincenzo Amato on Crialese’s Film about Italian Immigration to the U.S.

After a very well-received presentation last semester, Vincenzo Amato comes back to Montclair State University to address a topic that remains central to so many political agendas around the world, and in particular the U.S. where the Golden Door has shifted from embodying a symbol of national ethos to a controversial space and divisive subject. The conversation with Amato will focus on Emanuele Crialese’s acclaimed film Golden Door/Nuovomondo (2006, winner of 3 David di Donatello Awards and a Silver Lion as a Revelation Film at the 2007 Venice Film Festival). In it, Amato plays Salvatore Mancuso, a Sicilian of limited means and outsize dreams whose expressions of low-key defiance, genuine awe, and perceptive naiveté continue to reveal the emotions and aspirations associated with the decision to embark on a migrant journey. Amato’s visit is a special opportunity to hear behind-the-scenes stories linked to the making of this and other films by Crialese focused on migration, such as Once We Were Strangers (1997), and have an exchange on issues of border-crossing, human mobility and social and ethnic diversity.

Vincenzo Amato was born in Palermo and moved to Rome after high school. He has lived in New York since 1993, and currently resides in Maplewood, NJ. He comes from a family of artists active in theater and music: he himself is an iron sculptor. Amato began acting after meeting and becoming friends with director Emanuele Crialese, who made him debut in the film Once We Were Strangers, and chose him again for his next film, Respiro. In 2007, Amato was nominated for a David di Donatello for Best Actor for his performance in Golden Door.* Since then Amato has played numerous roles in films and TV series both in Italy and the U.S., working with renowned film directors, from Antonio Piazza and Fabio Grassadonia in Italy (Sicilian Ghost Story, 2017) to Angelina Jolie in the U.S. (Unbroken, 2014). He was recently chosen in leading roles in Lea directed by Marco Amenta and Buona compagnia by Cristina Comencini. He has played Enrico Berlinguer in a RAI TV series about Nilde Iotti, titled Storia di Nilde by Emanuele Imbucci.

*Note that the film is available via streaming for University-affiliated people through the Sprague Library.

New York Times Review (Critic’s Pick): “Those Tired, Those Poor: A Journey as Important as Its Destination” by A.O. Scott (2007).