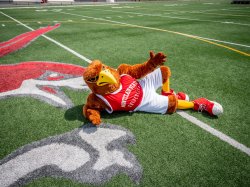 Rocky the Red Hawk stands between 5’8″-6’″ tall and closely resembles the red-tailed hawk, which many members of our community may see flying over campus throughout the year. Rocky is dedicated to spreading Red Hawk Pride and frequently attends events both on and off-campus. He never misses a Homecoming or Commencement and loves to come out of his nest as often as he can to support the students, faculty and staff here at Montclair State. 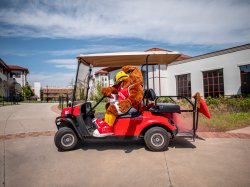 Rocky is available upon request, pending notice and availability. He loves taking selfies, passing out prizes, riding around on his golf cart with handouts and all around just having fun. So no matter what your event, we would love to try to make it!

Learn More about Rocky at Your Event

Being a mascot is more fun when there are other characters to work with, which is why we have created a small family for Rocky! Although the other characters do not appear as often as Rocky does, they do come out during notable events and special times of the year, like Rocky’s Birthday every October 5!

Roxy, unlike Rocky, is red! While the other members of Rocky’s family all don the brown feathers and red tail, Roxy has red feathers and a red tail. She is one of a kind, quirky and a little dramatic at times. She does represent a more feminine character and has even been seen wearing a tutu. Of all the family members, Roxy comes out the most, besides Rocky of course, and is invited to attend women empowerment events, fashion shows and other sibling related activities. Help us celebrate her birthday every March 18!

Rocky’s cousin Ricky only comes out on Halloween. He is a fan favorite though and every year we look forward to his appearance on October 31. He’s a bit shorter than the rest of the family and can come off a bit frightening, but he only means well.

We decided to create an uncle for Rocky so that there was no confusion over parental figures. Just like most families, aunts and uncles don’t have to be blood, and in this case it’s no different. Uncle Roy is an older gentleman and walks with a cane. He experiences arthritis when it rains but is a good sport about it. If you get the chance to meet Uncle Roy, expect a firm handshake and maybe a pat on the back.